If you are a vegetarian then this might not be the book for you - there is so much floppy dead skin within this story that it would even make a butcher blush! This is the second installment in the gripping Zombie series, and it will certainly not disappoint, if you are gagging for a good horror read. This book starts where the Undead finishes off. No time is lost in bringing the dramatic bus crash into focus as it flips onto its side and everything turns to blank before being flung headlong into more action, as the bloody entrails drip through every page.

The Zombies are growing with intelligence and things are really starting to heat up; there's no time for Bobby to lose. She finds herself in a strange hospital with lots of unanswered questions but before long she is faced with a full-scale Zombie disco, playing to the tune of ripping out flesh and brain feasting! At this point of the story, there is certainly lots to get your teeth into for sure.

The action sequences are well placed within the story. They bring well deployed bouts of scary tension that really create an impact on the reader. The giggles are perhaps optional as the quick one-liners might escape some readers. The slight development of sizzling romantic passion didn't necessarily enhance the storyline for me; at times it felt this was aimed at a more romantic audience. Nevertheless, this book had more graphic detail in than book one. In fact it had been intensely ramped up, which in my opinion was a good aspect, but the jury is perhaps still in discussion for me in terms of the romantic element.
This was a very engaging and gripping book to read, and to be quite honest, I loved (nearly) every page. It had a good ending in which to start book three, but I hope that this next book will continue to remain imaginative and to consider different approaches in order to keep it fresh.

Posted by Mr Ripley's Enchanted Books on September 24, 2012 No comments: 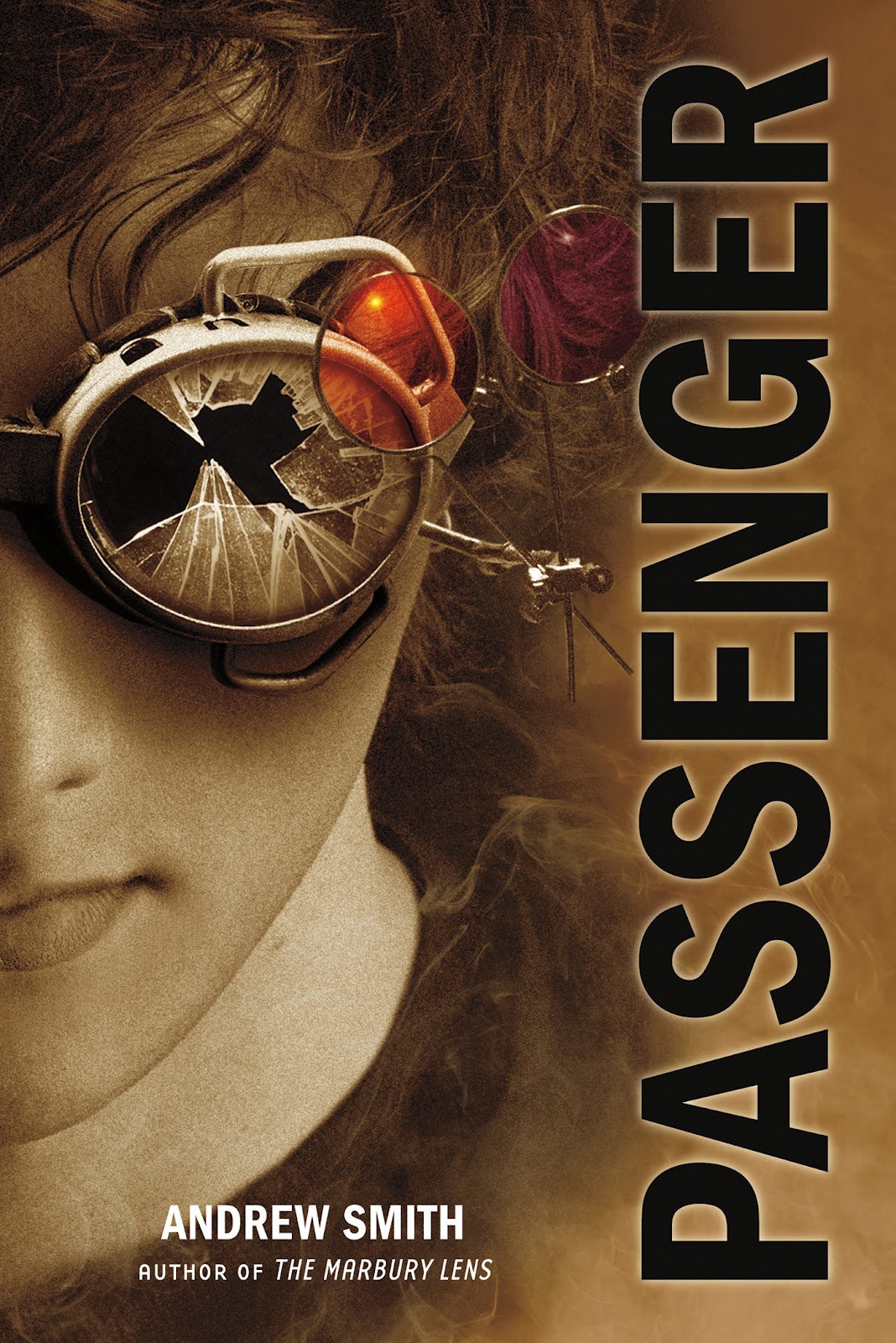 Andrew Smith - Passenger ( The Marbury Lens #2) Best friends Jack and Conner can’t stay away from Marbury. It’s partly because of their obsession with this alternate world and the unresolved war that still wages there. But it’s also because forces in Marbury—including the darkest of the dark, who were not revealed in The Marbury Lens—are beckoning the boys back in order to save their friends . . . and themselves.

The boys try to destroy the lens that transports them to Marbury. But that dark world is not so easily reckoned with. Reality and fantasy, good and evil—Andrew Smith’s masterpiece closes the loop that began with The Marbury Lens. But is it really closed? Can it ever be?

Michael Grant & Katherine Applegate - Eve and Adam - Published by Egmont Book 1,October 2012
This is a stunning new mystery-thriller from the bestselling writers of "Animorphs" and "GONE". It is an exceptional page-turner. Escapism just doesn't get more thrilling than this. 16-year-old Eve Spiker lives an easy life with her geneticist mother, Terra. That is, until she's involved in a freak accident and left with life-threatening injuries. Injuries that seem to be healing faster than physically possible. Recuperating at her mum's lab, Eve meets Solo, a hot teenage lab assistant who seems to know more about what's going on at Spiker Biotech than he should do. Joining forces to investigate, Solo and Eve uncover a secret so huge it could change the world completely. Because Terra's research is about more than just saving human lives. It's about creating them...


Cathryn Constable - The Wolf Princess - Published by Chicken House - 4,October 2012
Alone in the world, Sophie dreams of being someone special, but she could never have imagined this \. On a school trip to Russia, Sophie and her two friends find themselves on the wrong train. They are rescued by the beautiful Princess Anna Volkonskaya, who takes them to her winter palace and mesmerises them with stories of lost diamonds and a tragic past. But as night falls and wolves prowl, Sophie discovers more than dreams in the crumbling palace of secrets \.

Catherine Fisher - The Obsidian Mirror - Published by Hodder Children's Books - 4,October 2012
The experiments concerned a black mirror, which is a portal to both the past and the future. Venn is not alone in wanting to use its powers. Strangers begin gathering in and around Venn's estate: Sarah - a runaway, who appears out of nowhere and is clearly not what she says, Maskelyne - who claims the mirror was stolen from him in some past century. There are others, a product of the mirror's power to twist time. And a tribe of elemental beings surround this isolated estate, fey, cold, untrustworthy, and filled with hate for humans. But of them all, Jake is hell-bent on using the mirror to get to the truth. Whatever the cost, he must learn what really happened to his father.

Jake's father disappears while working on mysterious experiments with the obsessive, reclusive Oberon Venn. Jake is convinced Venn has murdered him. But the truth he finds at the snow-bound Wintercombe Abbey is far stranger ...


Martin Howard - Witches at War!: The Wild Winter - Published by Pavilion Books - 4,October 2012
Now, Sam and her mentor, the incompetent and rude but strangely likeable Esmelia Sniff, have been separated and evil is beginning to dominate the world. It's the longest, coldest winter since records began and the newspapers are reporting sightings of strange and evil creatures making their way towards the Bleak Fortress. Inside the fortress Sam is a prisoner to Diabolica's evil plans while her friend, the potion expert Helza Poppin, is trapped in the dungeon and scheduled for torture. Things ain't looking good.

Posted by Mr Ripley's Enchanted Books on September 11, 2012 No comments:

Charlie Higson’s - Brand new trailer for The Sacrifice and More


Written and directed by Charlie Higson himself, this is the fourth in a series of trailers for the series and is the most ambitious trailer Puffin has ever made for a book.  Shot in locations around London, including on the Millennium Bridge, the trailer features young actors from Forest Hill School, South London and a cast of zombie-sickos played by fans who entered a nationwide competition to appear in the short film.  They bring to life some of the scenes from the new book and a give a taster of the action to come.

The trailer also introduces us to a grotesque new character, ‘Wormwood’ or the ‘Green Man’, so called as his entire body is covered in mould - an effect which took nearly a full day in make-up.

‘The Enemy’ series is set in a post-apocalyptic London after a mystery illness attacks everyone over the age of fourteen.  Some survive, but those that do face a more terrifying fate – they turn into hideous zombies with an insatiable appetite for human flesh. Children form gangs and attempt to survive in an unrecognisable world where there are dangers around every corner.

Previous trailers for the series have had more than 100,000 combined viewings on YouTube and have seen Charlie Higson transforming into a decaying zombie; chilling footage of a terrified boy posting a clip online of himself being attacked by diseased adults; and, last year, a rotting zombie (with an uncanny resemblance to Charlie Higson) breaking into a room full of terrified children.

Filming for The Sacrifice trailer, Puffin’s most ambitious trailer to date, saw:

100 cups of tea and coffee drunk per day
90 hours of pre-production preparation
80 children auditioning for the cast
70 sandwiches consumed
60 members of cast and crew on set
50 litres of orange juice drunk
40 wardrobe items carefully damaged for zombie effect
30 hours of footage
20 litres of fake blood
10 hours in make-up for the Green Man
a 5am call time on the Millennium Bridge
2 days of filming
1 epic trailer!

Emily Cox, Head of Penguin Children's Marketing, said, 'This is our most ambitious trailer to date. Capitalising on Charlie's background and experience in TV, we have gone all out to create something gripping and entertaining that we believe will capture the (sick) imaginations of fans and new readers alike.'

Charlie Higson is a successful author, actor, comedian and writer for television and radio.   He wrote the phenomenally successful Young Bond series which has sold over a million copies in the UK alone and been translated into over 24 languages.  The series comprises five novels, all of which entered the children’s bestseller charts in the top five.  The first novel in his bestselling zombie-adventure series for teenagers, The Enemy, was published to critical acclaim in 2009. It was followed by The Dead (2010) and The Fear(2011). Charlie is a huge fan of horror films and books and even studied gothic literature at university.

After leaving university, Charlie formed a band, The Higsons.  He then became a decorator before turning to the world of television and going into partnership Paul Whitehouse.  His television successes have included Saturday Live, the Harry Enfield Television Programme, The Smell of Reeves and Mortimer, Shooting Stars, Randall and Hopkirk Deceased, the film Suite 16, Swiss Toni and of course, the Fast Show. They recently produced the award-winning spoof radio series Down the Line (BBC Radio 4), in which they both performed and which became the television comedy series Bellamy’s People (BBC 2).