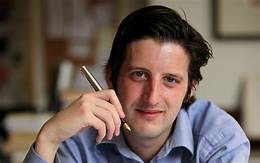 Thanks for joining us today. It's brilliant to be able to welcome Philip Womack to Mr. Ripley's Enchanted Book blog. His guest post will be talking about one of his up-and-coming book 'Wildlord'. Philip has really sold his new book to me. Hopefully, in October 2021, this will also be on your list and we will be in a time when we have more freedom to browse books. I'm already imagining walking back into a lovely bookshop to buy this book.  I'm now wondering what the book cover will look like and how the story will pan out.
Thanks for reading - we hope your interest has also been piqued. If you have any more questions please get in touch.

My work in progress isn’t, strictly, a work in progress; since, as I write, I have all but finished the final edit. It’s called Wildlord, and it’s my first ever teen novel, for readers of 13+, and will be published in October 2021 by Little Island.

A new book is always an excitement. We launch our carefully composed fictions out into the world, hoping that they will find readers, that they will enchant and enthrall. I have always written about magic; principally because, as a child, I was always much more drawn towards the worlds of fantasy than I was to anything set in the real world. Reading in and of itself is a branch of magic: we never, as adults, are able to read in the way that we did as children. I have always tried to write novels that are as immersive as those books I fell into as a child, curled up in the library or in my room, oblivious to the world outside.

Magic in fiction is also a way of thinking about power, and so what it means to be a teenager growing into an adult. Wildlord is about a sixteen-year-old boy, Tom, who receives a strange message from his Uncle James, inviting him to stay on his Suffolk farm. Without giving too much away, Tom decides to go. Only what he finds there isn’t a conventional farm at all, but something that exists on the boundaries between reality and other worlds.

Every book I’ve written has brought its own challenges, its own glorious stretches when everything seems to be going well, its own periods when nothing seems to work. But that didn’t happen with Wildlord. I loved writing it, from early scribblings to final quibblings about word choices. I began it in 2017, just after I’d finished writing The Arrow of Apollo, a novel for 10+ set in the legendary Greek and Roman world, which was published in 2020.
It might seem a bit of a leap from the shadowy, quasi-historical world of my ancient heroes, to a teenager with an iPhone and a laptop in 2021. But the themes are constant: how young people work with and against their parents; how they slot into the generations; the rules they must navigate to become adults.
Where The Arrow of Apollo moved around the Mediterranean sea, Wildlord has a much smaller setting: an Elizabethan farmhouse, Mundham Farm.  The building seems to extend and grow and shift, subject to mysterious powers. There is a strong sense of wildness, of being on the edge of civilisation.
The inhabitants of Mundham Farm are an ill-assorted bunch, and I had enormous amounts of fun pitching them into difficult (and deadly) situations. Mundham Farm is a nexus of powers, and Tom finds that there are stranger powers stalking the outskirts. These beings want to invade: and Tom has to stop them. But he finds himself thrown into an impossible conundrum, and what he thinks he knows is upturned and overturned almost every day. He finds solace in the woods, and in the diaries of a 19th-century rector’s daughter, which help to give him the key to solving his problems.

Wildlord is about finding a place for yourself in the world, as much as it is a magical story full of tension, danger and drama. It's also, in a way, about history and time. I hope it will find readers of all ages, and encourage them to think about the spaces in between, about the gaps between childhood and adulthood, and about love, friendship and family.
LATEST BOOKS, HOW TO TEACH CLASSICS TO YOUR DOG, OCTOBER 2020
THE ARROW OF APOLLO, May 2020
Weblog: www.philipwomack.blogspot.co.uk
Tumblr: www.philipwomack.tumblr.com
Twitter: @WomackPhilip
Posted by Mr Ripley's Enchanted Books on March 15, 2021 No comments: