Hello and welcome (こんにちは、ようこそ)  to Mr. Ripley's Enchanted Books. This has been a very emotional and poignant book review.
A huge earthquake and Tsunami struck Japan at 2.46pm on March 11, 2011. It devastated towns and changed the landscape forever whilst also triggering nuclear meltdowns in Fukushima. The world watched helplessly as a triple disaster unfolded and the chaotic struggle to contain the world's worst nuclear disaster since Chernobyl took place. Ten years later and the story of Tsunami Girl by Julian Sedgwick is born. Published by Guppy Books in March 2021 the book will finally spread its wings and soar into the world.
The book was inspired by the people, memories, and the author's visits to Odak, Minamisōm, Japan. The book is a three-year culmination of research and writing about the unseen crisis. It's a story to remember, savour and reflect upon. Just like petals falling from a Skura tree, this story showers the reader with a poignant and heartfelt story. It has both dark and light flowing throughout the narrative.
The book is part story and part manga (a comic art form traditionally developed in Japan from scrolls dating back as far as the 12th century). The manga illustrations have been wonderfully created by Chie Kutsuwada and are used to weave in the imaginary element of the story alongside the written reality. They particularly introduce and follow the super-hero character in the imaginary world (Half Wave) who is bound by Yuki's own manga creation which is very much linked to the back story. The character is pulled together in a quirky quality that I associate with watching a Studio Ghibli film, both of which I really love.
The narrative follows shy 15-year-old, Yuki Hara Jones, who finds herself caught up in the Earthquake and Tsunami whilst visiting her Grandpa. The story centers around both Yuki and her amazing Grandpa, who is an award-winning adult Manga artist. Back in England, she finds herself reliving the tragic events that unfolded on that unimaginable day. You'll find yourself walking a tightrope of emotions as you follow Yuki and the relationships between her English family in Cambridge (England) and her Japanese family as she attempts to heal herself by revisiting the disaster zone with the help of her friend Taka. 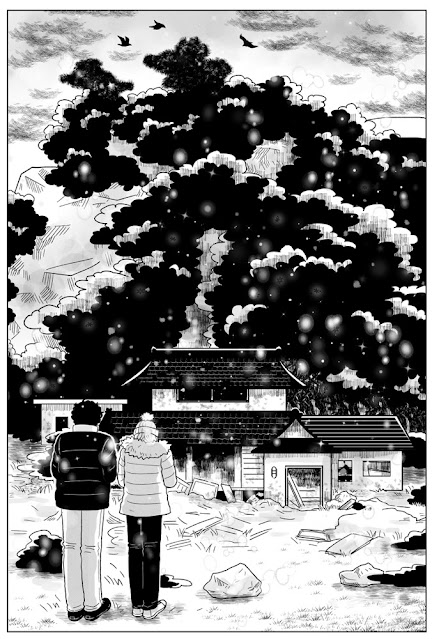 This is the most thought-provoking story that I've read for a long time. It made me feel so emotional that it really swept me off my feet and stirred many thoughts. It was almost like looking over the edge of the cliff and free-falling into the foamy sea. The story is about place/time, pain, loss, friendship, and finally finding one's self again. It charts the struggles in the aftermath and how life was viewed differently as a result of such devastation. It's about not only the importance of memories but also after being in such a dark place trying to find the light and courage once more to make life a full experience and as rewarding as it can be.
The way to best describe this book is as one massive Hanabi (花火) firework display as it sparkles, pops, and fizzes on the brain. A fluttering ghost story (Yami Shibai) delivers the yin and yang punching into the plot with a beating heart. The encounters and the feelings of the characters have been masterfully written. I view the story with sadness but also have fond memories from the special moments within. One day I hope to take a journey to Japan and, as a result of this book, will remember the people who lost their lives as well as those who were left behind to deal with the devastation.
The story has been very well researched and written. It really is a very fitting tribute to one of the biggest natural disasters to happen in our lifetime. I'm sure that many people as they read this book will feel and view things differently but that's why I particularly love books like this. There is certainly no other book like this available to buy at the moment so I really would recommend that you read this. I would be particularly interested to know your thoughts on this amazingly well-published book. Thank you for reading and have a great day.
If you also fancy a doubled signed copy of the book. Here is the link to do so! https://www.kenilworthbooks.co.uk/tsunami-girl/

Posted by Mr Ripley's Enchanted Books on March 11, 2021 No comments: