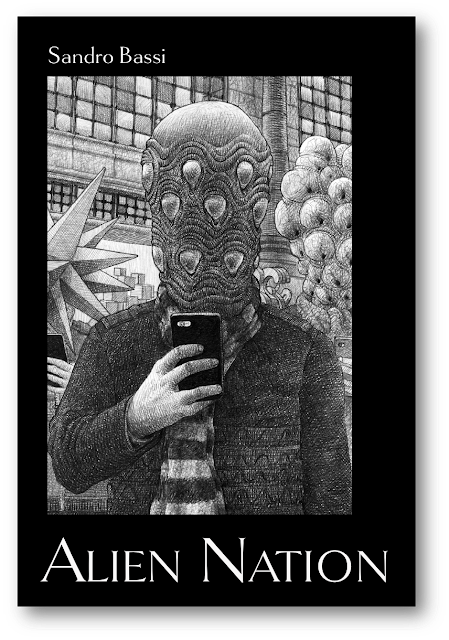 I have something very different to review this week. It's a very special book that is not just an illustrative delight but also conveys a powerful story that hits the reader on so many different levels. Sandro Bassi is an illustrator from Venezuela whose work was the 2019 Bologna Children's Book Fair Illustrator Show selection. Alien Nation is his first book and was published by Levine Querido on April 13, 2021. It has already received great acclaim in Mexico where it was originally published.

It all begins on an unforgettable subway ride in an alien world or is it? The story explores the theme of travelling and technology in all of our lives. As you open the pages, you find yourself on a journey of wonder as you marvel at the black and white illustrations. It's a wordless picture book that shows the commuter moving through a crowded train station. You will glide across the pages mesmerised in a world that is totally different from our very own. However, there may be some similarities as we too can be glued to technology both day and night. For me, the story explores the theme of being engrossed in handheld devices whilst the world continues to go on around us particularly as we travel on public transport. We might as well be an alien of this world when this happens. 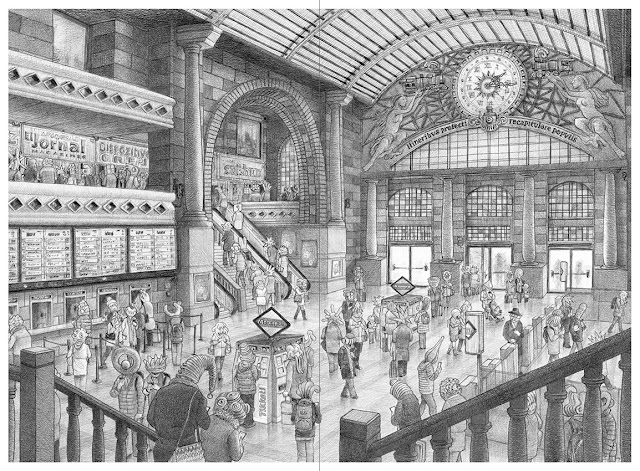 The book is illustrated using thick pencil lines to create amazing drawings that convey a fantasy world that requires closer inspection. One of the main features of the book focuses on the commuter. Each is drawn in human form except for the heads and faces. Instead, each face and head is represented in a number of ways through bulbous or blocked organic structures that somehow convey feelings to the reader. The narrative asks me questions about the future of us as a race and how far technology will develop. How much more of our time in the future will we spend on our devices, reading, playing games, or watching programs? However, is this loneliness that we seem to seek whilst commuting creating a hive mind society? 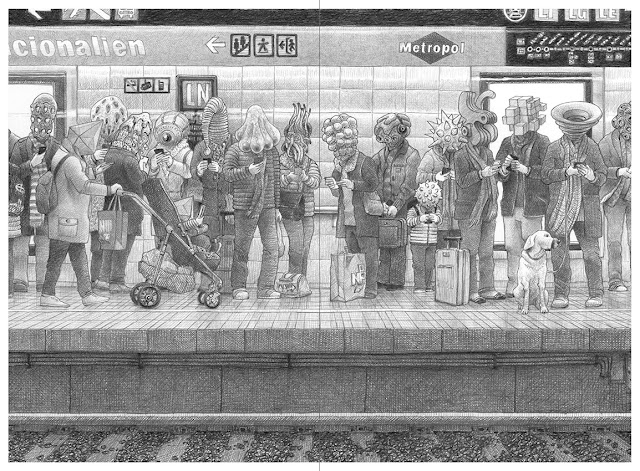 This is a very special book with a cinematic appeal. It shows a world that we are at risk of losing out on and real adventures beyond the screen of a phone that might be passing us by. It's time to visit the eerie vision of a spectacular train station and a strange baby in a stroller as a packed metro awaits us. This book is a real page-turner that is full of real-time illustrations that will capture the attention of all readers from eight to a hundred and eight. Be warned, we might just be glimpsing a future that is not as alien as we believe from our very own.