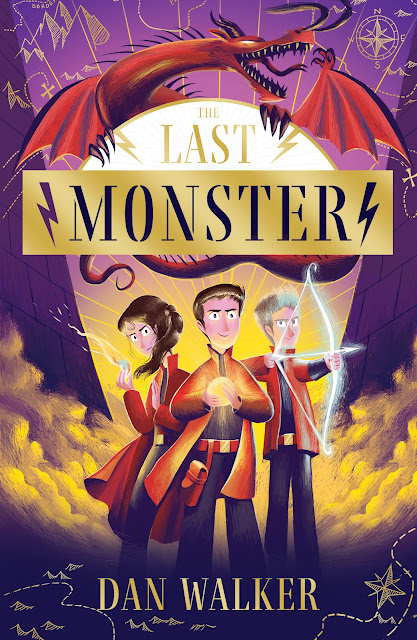 Today we are really excited to REVEAL the stunning new book cover for Dan Walker's latest novel. We will be sharing it here and on social media. We are also doing a fantastic giveaway on our Twitter account @Enchantedbooks to win a great prize (see pinned Tweet for more details).

This August, UCLan will be publishing the amazing MG adventure story, The Last Monster, by Dan Walker who is also the author of the Sky Thieves series. Anyway, this is the sequel to last year's book, The Light Hunters, which was also absolutely brilliant. With this new adventure, you can expect another fun and thrilling time - it's sure to be a hit with young readers looking for some much-needed escapism. The book cover has been created by the talented George Ermos who is one of my favourite book illustrators. He's produced so many great book covers - we absolutely LOVE this cover!

Here is the blurb for the book to get you even more excited for the publication.

The Light Hunters have fought Monsters for centuries and Squad Juno are the very best at it. From cities to villages, the young group’s abilities are on show for all to see now that their powers don’t have to be used in secret. Every victory they have prevents a Monster from taking more victims, preventing more loss.

Lux Dowd, Squad Juno’s healer, has had more than enough loss... But a more immediate loss is that of his powers. Lux can’t – or won’t – heal his teammates. Whenever he tries, a terrible energy comes from within and hurts the people around him. Lux can’t afford to lose anymore of those he cares about.
Sent on a mission that could end their war against the Monsters, the Light Hunters soon find themselves making new allies in their quest to unearth an ancient secret that may be able to stop the attacks. Could this really be the last monster they fight?

Posted by Mr Ripley's Enchanted Books on March 14, 2022 No comments: