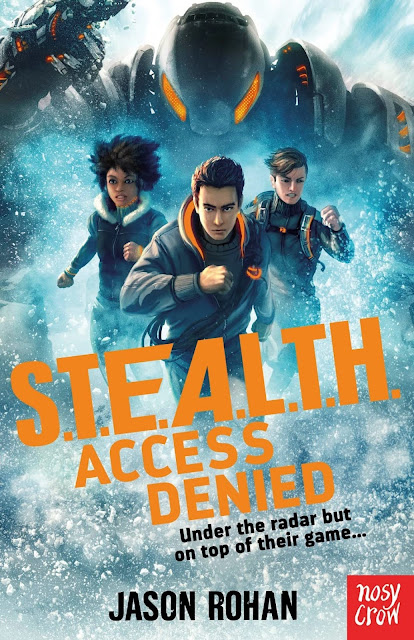 Are you ready for a new series from Jason Rohan? Are you looking for a good book that plunges you into a world of gadgets, espionage, and the world's deadliest weapon? If so, then you might have just come to the right place. Let me introduce you to S.T.E.A.L.T.H - Access Denied - which is due to be published by Nosy Crow on 7th April, 2022. It's time for an unlikely set of kids to save the WORLD again. This is the kind of story you can really escape into as you travel down a spider's web of intrigue encountering some rather bizarre moments.

IT'S JUST ANOTHER DAY, that is until Arun arrives home from school. His house is full of armed police and his dad's just disappeared. This all leads to a brilliant start featuring a secret AI project called MANDROID. The narrative is a really slick-tight performance from a group of kids all with interesting backstories. Arun is smart and reserved, Sam is the geeky one who loves tech and Donna is the action, athletic tough-talking member of the group. The characters really pull the story together like magic glue which sticks to the reader in many fantastic and vivid ways. Their ability to problem-solve is a particular strength of the narrative that makes it particularly enjoyable.

There are plenty of scrapes including the attempted theft of the deadliest weapon on Earth by a group of organised villains - never mind the car chase smashes and run-ins with the police. The plot is a race to save the day; it's ingenious, clever, and at times produces some deeply amusing situations. I absolutely loved the characters as they were warm, genuine, and relatable. I also enjoyed the depth and detail of information given when introducing the weapons and gadgets.

This is a perfect book for everybody; a great mash-up of a story, influenced by comics, in a heart-stopping mission that will be sure to be your next favourite read. It has a great climactic ending surely leading up to another book. In the meantime, seek out a copy of S.T.E.A.L.T.H in the near future.  Access is only denied if you do not BUY a copy and read it. What are you waiting for?

You can read an exclusive extract HERE

Posted by Mr Ripley's Enchanted Books on March 25, 2022 No comments: