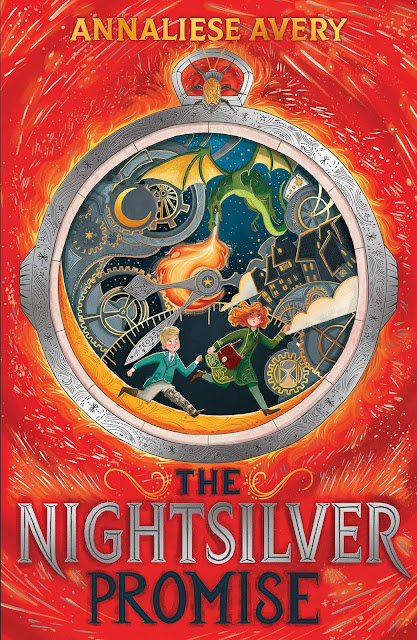 Hello Everybody. In this interview with Annaliese Avery, we promise you adventure, dragons, and a heady amount of excitement. The Nightsilver Promise is one of the most eagerly awaited book releases and one we cannot wait to read. The book will be published by Scholastic on the 6th May 2021. However, we thought we would take the opportunity to explore more about this intriguing book.
If you are interested in supporting this debut author then you can pre-order a copy here or pop into your local bookshop and buy a copy. We are looking forward to seeing what your thoughts are here or on social media. Twitter: @Enchantedbooks and @AnnalieseAvery

The Nightsilver Promise is an epic race against time adventure! Thirteen-year-old Paisley Fitzwilliam lives in the London of the Empire of Albion where the Dragons of old have all been vanquished and the stars of the Celestial Mechanism dictate the rule of the land. In Paisley’s world everyone is given a track of stars which is tattooed on their wrist that tells them what their destiny is. Paisley has lived without a track until now and when her stars tell her that her fate is to die before her next birthday she begins a race against time adventure to protect her dragon-touched brother, find her missing mother, and change her stars before her destiny catches her.

The characters are very comfortable in their setting, they are used to seeing the floating boroughs of London littering the sky, or travelling on aerocopters, and visiting grand buildings like the Institute of Celestial Mechanics where the inside of the building shifts and moves.

I think that Paisley would tell me that she like living in London but would love to live on the floating borough of Kensington Above, and her little brother Dax would much rather live in the Northern Realm where Dragons are allowed to roam, unlike in London, which is part of the Empire of Albion where all dragons are banned and killed on sight.

The Dragon Walkers are an amazing group of young girls and women who have all been Dragon Touched. The Dragon Touched are all born with dragon attributes, they might have dragon wings or their skin may be covered in scales, they may have dragon claws at the ends of their fingers or they might have an unseen dragon ability like immense strength or being able to breath fire. No dragons are allowed in the Empire of Albion and this extends to any one found to have Dragon Touch, so to protect themselves those with Dragon Touch become members of the Dragon Walkers and live in the floating boroughs of London. As well as being quite brilliant at engineering, Dragon Walkers are skilled fighters. Their fighting skills allow them to protect themselves and the Dragon Vaults where they look after people’s treasure.

In The Nightsilver Promise Paisley and Dax visit their family treasure trove at the Dragon Vault on the floating borough of Kensington Above. I don’t want to give too much away, but let’s just say they find more than they were looking for there.

The awesome cover was illustrated by the very wonderful Natalie Smillie and designed by the equally wonderful Jamie Gregory. I think the cover gets across the energy of the story; the epic adventure and the vastness of the world, as well as the peril that Paisley faces.

No, when I first started writing I expected the story to be a stand alone book. It then grew as I was writing and after a chat with my Golden Egg editor Bella Pearson, we realised that the story was bigger than just the one book.

What a fabulous question. I am a keen amature astronomer and I like to think of building a story as being a very similar process to the way that the solar system is formed. The first thing you need is a large cloud full of tenuous ideas floating about in your imagination. Every time you come across an idea that you think might have promise you pop it in the cloud and you just let all those ideas swirl about.

When two ideas connect they start to draw other ideas towards them and when they do they erupt is a massive explosion. If we were building a solar system this eruption would form the star, as we are building a story system what we form is the central idea that all the other things in the story will circle around. Just like with a solar system there can be more than one star, more than one central idea.
Around this then forms a thing called an accretion disk, this is where all the matter that will make the planets and moons and comets reside it is made of all the star stuff that was blown off when the star formed. When it comes to the story the accretions disk is full of all the ideas that were in the cloud before the central idea formed. Some of the ideas have changed, some have remained the same.

The ideas with the most mass will stay closest to the centre of the story; they become the characters that travel through the solar system of the story like planets and the world-building elements that give the story its colour and shape; it’s space to travel through.
In building a solar system the heavy elements stay closest to the sun, they form rocky planets, and the lighter elements drift outwards and collect together often forming gas giants - much bigger planets whose gravity can affect the objects in the solar system. In the story system, I like to think of these large gas giants as elements of theme and tone.

When the story system has formed, when the characters have settled into their orbits and all the elements are moving, that’s when I have my story.

I think that accessing and assessing any type of story is a great way to become a better writer be it through a movie or play, a song or a poem, a painting or a dance. Thinking about the story that we are being presented with, the emotional response that we are having to it, the way it makes us feel, what it makes us think about, the connections that we find, recognising the stories around us and how they speak to is a great way of building up our skills as storytellers.

I love Twitter. For me, social media is about connecting with my fellow writers, seeing how they are doing, supporting them in their journey, and keeping up with what’s going on in the industry. Also, it’s the best place for book recommendations. I’m not as good at Instagram and I don’t really like to use Facebook, and my children have said they will disown me if I ever go on Tick-Tock! so I tend to be most active on Twitter, I feel it’s important to engage on platforms that you like otherwise it feels like a chore.

I think that social media does have an impact on the publishing process but the impact that I would say is most important for a writer is to look at if the time spent on social media is enriching. If it is something you enjoy doing and have fun with then do it, but if it becomes a distraction or a procrastination tool and takes you away from your writing then maybe you need to assess its value.

The thing I’m most looking forward to is sharing Paisley’s adventure and getting to meet readers. I know that things are a little different and difficult right now, and it might be a little while before I can visit schools, libraries, bookshops or festivals but as soon as I can I will be there.