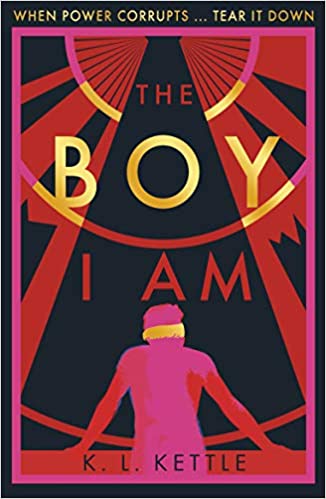 Welcome to another fantastic interview. This time it is with debut author K.L. Kettle who had The Boy I Am published at the start of the year. This book really delivers a story that is both detailed and structured; producing an unusual story with high levels of realism that has some relevance in today's world. The book cover has been creatively illustrated by Thomas Truong. In fact, it was a strong contender in last year's book cover wars (please check out this year's competition if you haven't already). We hope you find this interview interesting and if you haven't already read this story then I recommend you purchase a copy today. Have a great day and stay safe.


I love playing with genre and tropes, because ultimately, Iit’s a lot of fun to subvert the expectations we’ve been trained to expect as readers, and consumers of media in general. We don’t realise often how story literate we are, because we’re fed stories on a daily basis, until these expectations are twisted. YA Dystopia is a genre with a lot of tropes that are fun to play with. I’m hoping that this subversion of expectations makes The Boy I am stand out, particularly by gender-flipping a traditional feminist narrative. I hope that it’s enjoyable to read because it’ll catch you off guard, both with the big twists, and in the small moments.

When first drafting I always intended that gender equity would be a key theme in the story, but this certainly evolved over time in a way to cover social power dynamics in general, and the challenges of self-identification, self-understanding and definition when faced with social expectations. As these themes are so intertwined in the real world it didn’t feel hard to balance them in the narrative, but it was a challenge balancing them with other elements I wanted to build into the story (the thriller element for example.)

There was the early moment when I hit upon the idea to gender flip the narrative, having not seen it done before, it really unlocked the story. Though the story began as a dual narrative, the next eureka moment was at the point I committed to a single narrative, focussing on Jude. I was afraid of it at first, the idea of writing a feminist themed story with a biological male as the main protagonist felt foolish and wrong, but at the same time unavoidable given the voice of Jude was so Strong. The third Eureka moment came near the end, when the last few pages final fell into place, and were the result of my editor pushing me to a better ending, one I’m supremely proud of.

It’s probably inevitable that all of the characters in The Boy I Am are are bound to carry some of my attributes, possibly a load I don’t even recognise. There are certainly traits Jude has, heightened for sure, that I drew on from myself, particularly his negative thinking, routed in his desperation to please and fear of failure. It would be nice if some of his positive traits come from me too, his loyalty and tenacity, for example. If I develop The Boy I Am into a series or write a sequel I really would love to develop his self-confidence as well as his activist side, which only really start to emerge in the last few chapters, as well as show the challenges that come when you develop those traits in a society that pushes such things down.

At University I studied Politics and Economics, so as the world in the novel developed I would constantly develop a sort of supporting ‘wiki’ covering the financial system, legal, governmental and social structures which provide the scaffolding. All of the systems are built on present day, evolutions of present day structures, or even historical ones. I felt it was really important to ground this world in ours, to make it as clear as I could (given it’s told through the eyes of someone who is taught about the world in a limited way) that the world in the story has our own present as a foundation. It made it easier for me to imagine the world, so I hope it works for the reader to.

Probably just the time it took to reach the final story but I love the collaboration process and working with multiple editors, both before and after signing with Little Tiger, was a wonderful journey of discovery.

I’ve reached the point where reading reviews is no longer helpful, both the kind and positive ones and those for whom the story, for whatever reason, has not resonated. All reviews have fuelled imposter syndrome as I work on my follow-up novel. In the early months they were great, as particularly during the pandemic it was so hard to connect with readers and understand what really connected and what didn’t.

The book was written pre-pandemic but I certainly think that entrenched social groupings, segregated living and the ‘othering’ that can occur in entrenched and trapped communities is present, and was fascinating to see happen in the real world during the pandemic.

Nerds themselves, mostly. I love people who are passionate about what they do, particularly when it comes to technology. Coders and application builders are as creative and driven as any writer, and the way that the things we use on a daily basis are built are created with much the same way books are created. I have a very evenly split left/right brain, so can marry my logical and creative thinking in ways that some people can’t – I love bringing logical to the creative process and creativity to the logical.

By Mr Ripley's Enchanted Books on November 28, 2021 No comments: