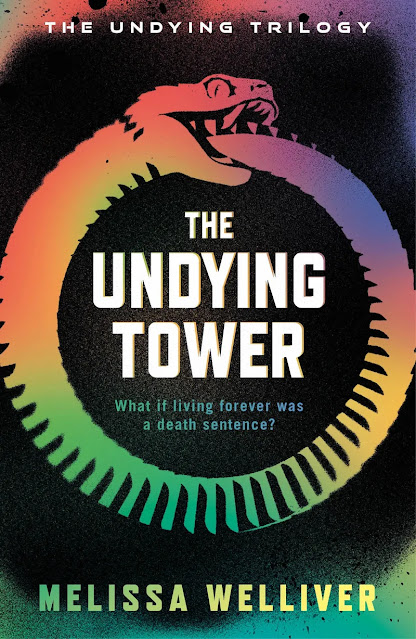 Hello Everybody. It's time to talk YA fiction on Mr. Ripley's Enchanted Books with the debut book by Melissa Welliver. The Undying Tower is the first book in an action-packed dystopian trilogy that will be published in October 2021 by Agora Books. In this interview, we get a fantastic insight into the story, the characters, and the author's road to being published. We hope you enjoy this post.
If you fancy finding out more or you just want to get ahead then please preorder HERE. There is a possibility that you might be able to get a signed copy and some special extras. Enjoy your week.

Great question! I think something major that is in there from the beginning is that Sadie is a Synaesthete – someone who has a particular cross-wiring of her brain so she associates smells and colours with certain emotions. She is an artist, and her synaesthesia informs her art just as much as her other senses. For the most part, the colour match-ups with the emotions are based on my own synaesthesia.

If you’re missing the dystopian YA of the 2010s, but want something with a bit of a reboot, then you should absolutely read The Undying Tower! If that doesn’t persuade you, don’t listen to me, listen to Michael Grant, author of the Gone series: “In the spirit of The Hunger Games but deeper, more heartfelt, even profound in its examination of the downsides of eternal life. I loved The Undying Tower. Melissa Welliver has arrived on the scene and attention should be paid.” (I know, I’m still star-struck!)

3.    The book is set in a dystopian world. What does the future look like for the characters in the book?

The future is bleak, I’m sad to say! The world has been ravaged by nuclear war, climate change disaster, and an over-population crisis. Throw into the mix that 5% of the population will never die from old age, and these issues only get worse. That said, the young heroes of the novel have good intensions and a will to do better than their forefathers, so I’m hopeful that things could get better one day (look out book 3!)

4.    Is there an underlying message you would like readers to take from this story as they read the book?

The major message is that if you have a voice, use it. The book really champions fighting for what’s right, especially when the world is against you.

5.    The Undying Tower is the first book of a trilogy. Do you know how the story is going to develop across the other two books?

While books 2 and 3 are yet to be written, I do have a plot outline for each, plus one for the overall arc of the trilogy as a whole. I’m learning a lot about myself as a writer throughout the publishing process, and those lessons are bound to affect those outlines a little! But on the whole, I know where the story ultimately needs to end up.

6.    Do you have a favourite character in the book? If so, who is it and what makes them so special to you?

I really want to be best friends with Rivers. She is the feisty right-hand-woman of our main character, Sadie, and she totally kicks butt. She also has a softer side that we see the edges of in book 1 and that I want to explore further in other books. Rivers always has your back, plus she’s pretty handy with a knife, so I definitely want her on my survival team!

7.    If your book was to be made into a movie, which celebrities would you like to star in it?

A film deal – the dream! The Undying Tower is set in the UK, so I’d love to see some British stalwarts like Patterson Joseph or Benedict Cumberbatch in there, perhaps as members of the resistance. That said, the Avalonia Zone (the new name for the British Isles) does own some overseas colonies, so there’s certainly room for some wonderful American or European actors. I’d like the younger roles to go to younger actors, perhaps even to an as-yet-unknown person – to give someone a big break like Agora Books has given me would be another dream come true!

8.    Please could you tell us a little about yourself and how you became a writer?

I’m Melissa and I live in the North of England. Like most writers, I’ve always wanted to write, but wasn’t sure how to go about it. The publishing industry can be very opaque and that can make it difficult for new writers. In the end, I did a fair few courses for creative writing and slowly the idea for The Undying Tower came together. It’s been nine years of perseverance, rejections, ups and downs, but I’m finally here. Never give up!

9.    If you had a soundtrack for this book, what would it be and why?

I listened to a lot of film soundtracks when writing The Undying Tower, funnily enough. I think a big, dramatic score by John Williams is a perfect accompaniment to the story’s punchy themes and action scenes.

10. What do you think is the main thing you have to get right when writing a book for Young Adults?

Voice. With any age group this is important, but especially so with YA. We’re competing against video games, TikTok, Netflix – a whole array of distractions that seem bigger and better than reading. If you don’t nail that voice, your teen audience won’t want to follow your character for 300 pages on their adventure. Voice helps any story come alive.

Posted by Mr Ripley's Enchanted Books on September 08, 2021 No comments: