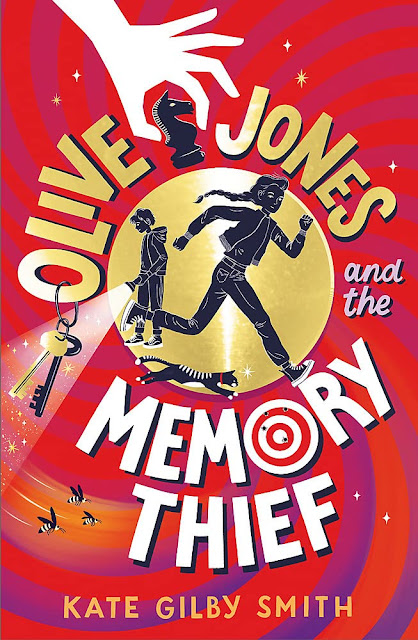 Hello Everybody! It's time to introduce you to our next author interview with Kate Gilby Smith. The Astonishing Future of Alex Nobody is her first book to be published by Orion Children's Books whilst Olive Jones and the Memory Thief is her latest book. The author was born on the island of Guernsey which I'm sure will be a backdrop of huge inspiration. From fiction to non-fiction, we travel beyond books to find out more about the author and who they would travel back in time to meet.
1. Your second book is entitled Olive Jones and the Memory Thief and is due to be published in June 2022 by Orion Children's. When and where did you get the first idea for this book?
The idea for Olive Jones and the Memory Thief came from a ‘what if’ question that popped into my head one day. What if one day in the future we could record our memories? I kept thinking about this question and in particular about whose memories I would most like to watch if I could. I started to think about how I’d love to watch some of my grandparents’ memories, to get to know them better than I was able to when they were alive. At the same time I was thinking about my grandad who I saw lots of when I was growing up but had always been quite mysterious to me. I developed a bit of a theory about why he was so mysterious despite living so close – he was secretly a spy. That gave me the idea for a grandparent character – called Grandma Sylvie – who is secretly a spy, and a protagonist who learns about their grandparent’s life through the memories they leave behind when they pass away. That was the start of the idea, though I had no clue where it would take me from there!

2. How do you go about planning and plotting a book? Do you have any tips to share with other writers looking to get their stories published?

After having the initial idea, I had to ask myself and answer loads more questions. What technology does Grandma Sylvie use to record her memories? How does it work? Why does she do it? What’s the protagonist of my story like? What’s her relationship with Grandma Sylvie like? And many more questions like that. From the beginning I had an image in my head of the main character, Olive, staring through her window at her grandma’s house across the road and wishing that she knew more about her. So I knew that’s where I wanted to start. Then I went about plotting the book in chunks of about three chapters at a time, not knowing where I was going to end up. It took me a really long time to work out what I wanted to happen in the book after Olive receives her grandma’s memories. In fact, I had to completely rewrite the second half of the book as I wasn’t happy with the plot. It was hard to do that, but I’m so glad I did.

As for tips, I would encourage writers to keep going even when the book feels like the most terrible story anyone has ever written. I would also encourage them to share their writing with a trusted friend of a family member and to listen carefully to their feedback. And make sure your first three chapters really hook your reader because that’s the bit literary agents tend to read before requesting the full manuscript.

3. You also work as a publicist at a London publisher of science, philosophy and history; are there any elements of this particular job that help you when writing for children?

Yes definitely! As a publicist for non-fiction books I’m always around interesting, new and exciting ideas which is hugely inspiring, especially as I like writing books with sci-fi and futuristic themes.

4. Did any of the books you read as a child reflect the Guernsey surroundings/island you were brought up on? Are you able to reflect aspects of the island into your ideas or stories?

That’s such an interesting question. I don’t remember reading any children’s books set on Guernsey but growing on the island I often felt a sense of freedom and adventure and wildness when exploring the beaches and forts with friends and without any pesky grown-ups that was a bit like some Eva Ibbotson books I read when I was a child. I would love to write a book set on Guernsey one day in the future. It’s such a beautiful place with a rich folklore and history, from fairies and ghosts to pirates and shipwrecks.

5. Do you have a favourite illustrator?

The first book I was obsessed with was My Naughty Little Sister by Dorothy Edwards and illustrated by Shirley Hughes. As a very naughty younger sister myself I really related! And it made me think that becoming an author was the very best thing you could do. So my favourite illustrator is Shirley Hughes.

6. You love eating ice cream; what are your favourite flavours and which characters in your books would also love these flavours?

Chocolate with chocolate chips and chocolate sauce and a chocolate flake. With chocolate sprinkles. I think that this would also be Gerty’s favourite flavour (from The Astonishing Future of Alex Nobody) as she has a real sweet tooth and would never consider so much chocolate ‘too much’.

I change my mind about this question all the time but at the moment I would really love to go back in time to meet Fatima al’Fihri because she is credited with founding the very first university in the world back in 859 and yet there’s loads we don’t know about her life.

8. What is the strangest question a reader/editor has ever asked you? Can you remember what your reply was?

I was asked by a kid whether I’d write a story about my own skeleton. I said I would definitely consider it!

Posted by Mr Ripley's Enchanted Books on August 17, 2022 No comments: