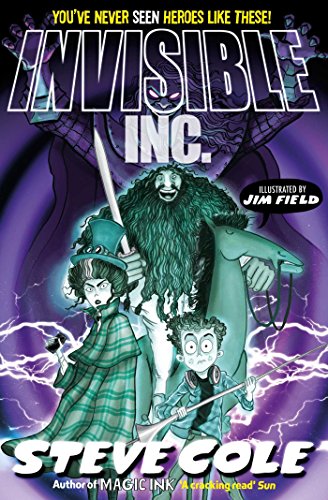 Noah’s mum’s new invention can zap ANYTHING into a ghost of its former self. It’s still there, but you can’t see it. You can’t touch it.


When the sinister ‘Seerblight Solutions’ steal her invention, Noah is zapped – and finds he’s not the first to have been turned ‘invisible’ through the ages. With all humankind in terrible danger, Earth’s last line is defence is one you’ve never seen or heard of: Invisible Inc.


A medieval knight. A Victorian inventor. A poetic pony. And an ordinary boy. Saving the world? THEY’LL SEE TO IT!

Step Away From The Television, flip over the book cover and turn the pages of a hilarious read from the bestselling author, Steve Cole. He has written some of the best inventive reads and delighted large audiences with cracking, ingenious worlds such as Astrosaurs and Magic Ink as well as his older series the Young Bond books.

This is another brilliant book which has been illustrated by the talented Jim Field. The black and white images enhance the craziness by giving an atmospheric and fiendish feel creating a world of mayhem and chaos. Every page that you turn will make you giggle like a new born baby. Be warned though as the book is full of advice that you should ignore and definitely not follow!

You will find yourself running a monster battling gauntlet with the main character Noah Deer, an ordinary boy, who needs to save the world against the force of Seerblight. This character is a dangerous 1000-year old bad guy, who is accompanied by his unpleasant sidekick, Mr Butt. Fortunately, Noah has backup in the form of the singing medieval knight, Sir Guy de Yupp, who has a knack of bursting both into trouble and tuneless yelling.
Here is a ditty from Sir Guy:

"I asked my mama what will I be
When I am five times taller than your knee.
BE A HERO! said she.
SMITE YOUR ENEMY!
With A SWORD AND MACE,
YOU CAN SMASH HIM
IN THE FACE!
OHHHHHHHHHHHHH"

Also within this inventive escapade, you will meet the inventor, Trudi Deer, a teacher and a scientist who is always working on amazing projects. She is a lover of baked beans or perhaps not! You will also be enchanted by Maloney the Phony the poetic pony and Lady Jemima Smyth who will pull the strings. She has retired from Invisible inc, as a battler of ninjas and is the fire power against some hypnotising chickens.

You will really be engrossed in this frantic explosion of action and adventure. It is a cracking book to pluck off the shelves for the younger reader, especially reluctant boys. The humour and the jokes come thick and fast; they hit the mark for all ages and genders. Throughout this fantastic story, you won't be able to stop yourself from reading this book out aloud with funny accents as you snort with laughter at the ensuing wizardry madness.

This is another outstanding performance from Steve Cole that will provide a smile on your face and lead you into a wold of pure escapism. It is a fantastic choice for a family read and thoroughly recommended.
By Mr Ripley's Enchanted Books on August 17, 2016