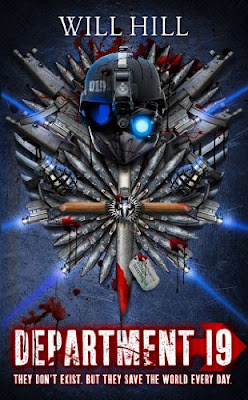 Department 19 is a book that you're going to love............
HarperCollins have started the year 2011 by publishing some fantastic books - this is the second book to blow me away by them, already.  I don't want to give away too much about the story, as I think you should pick up a copy, and read it for yourselves. However, this is a really exciting series that has been written by the debut talent of Will Hill.

Check out what he has to say about the book below.

This book is a fast-paced, rampage of action which is full of entertaining story writing told in two parts. The first part is through modern day life but this then interchanges with the Victorian era. At this point, it develops into a traditional, gothic horror; bringing some of the legendary characters into play like Van Helsing, Frankenstein and Dracula. The story is based around the telling of Bram Stoker's Dracula but taken one step further with a sprinkling of embellishments. However,  you'll be able to see how this develops for yourself.

The historical detail of the story sucks you in like a Vampire's thirst. In fact, as the plot keeps returning to the past, each time it has a greater impact on the present! The result of this, is that it has a profound effect which will leave you to think more about what could have been.

At times, as I was reading this book, I found myself clutching the book so hard that my fingers had turned numb. This book is an absolute, non-stop blood bath, of gore and guts. Especially through some of the epic battle scenes that are played out within. They will certainly entertain your pulse rate as they're quite graphic at times, but nevertheless, written tastefully.

The book also has an emotional element attached to it through the desperation faced by Jamie to find his kidnapped mother. As well as the strong bond that he feels between himself and a Vampire girl. He also has to fight through his teenage anger, which is depicted frequently, as well as trying to come to terms with the force of violence and sudden death that surrounds him. All of these elements are skilfully dealt with and give great strength to the book.

This book will leave your head spinning, especially at the end, as there is so much to take in. Will has really laid down the foundations to a great series. Until the next time.................
Posted by Mr Ripley's Enchanted Books on January 29, 2011

I am really looking forward to this. Great review :D