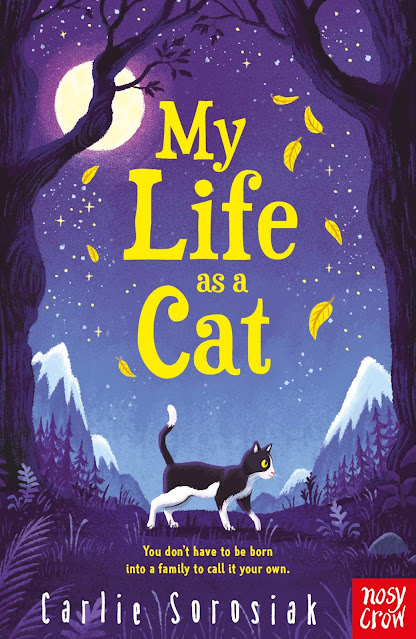 This is a late book review for My Life as a Cat by Carlie Sorosiak as it was published in September 2020 by Nosy Crow. When I received this book through the post, I made a quick and snappy judgment not to read it. However, reflecting on my decision a few months later, I decided to have another look at it and give the book a chance. I started reading and felt it was quite slow going for me. However, the more I read, the more my own world started to slow down. In fact, the WORLD STOPPED as I became fully immersed in the characters; and what characters they are. Amazingly written, they lifted off the pages with such magical colour. I was absolutely hooked and loving this book so unexpectedly - that makes me really smile and feel delighted.

Let me introduce you to Leonard who has never had a name ... or a body. Or in fact a best friend but he is excited to try being a human. However, unfortunately, something has gone terribly, terribly wrong. On their three-hundredth birthday, every alien from Leonard's home galaxy gets to spend a month in the body of an Earth Creature. Leonard was supposed to become a Forest Ranger in Yellowstone National Park but there was a mix-up and now he finds himself stuck as a stray cat. What is he going to do?

At the start of the plot, he is rescued in a storm by a young girl called Olive. The journey they both go on is beautiful and so heartfelt - it really is wonderful to read. Olive is brilliantly portrayed in a wise and thoughtful way which makes this narrative very, very special. She has the biggest heart and is loyal, loving, and might be seen very differently as she is judged by other people. The concept is brilliant and depicts an amazing and poignant friendship which is both moving and eye-opening at the same time.

The storyline shows us the simplest of things like enjoying the sunset, sunrises, the beauty in the natural landscape, and spending precious time with family and friends. For me, I can certainly relate to that as this year has not been a great year for me and many others. However, one of my particular highlights was seeing the Cinnabar Moth and the rare Tansy Beetle for the first time. It was really amazing and helped to pull me through a tough patch - just like the characters in this book. There are some hilarious moments that cut through the seriousness of some of the topics. However, the brilliant ending is really up-lifting just like a good old movie. I give five huge paw prints for this book so please give it a chance and settle down to read it.