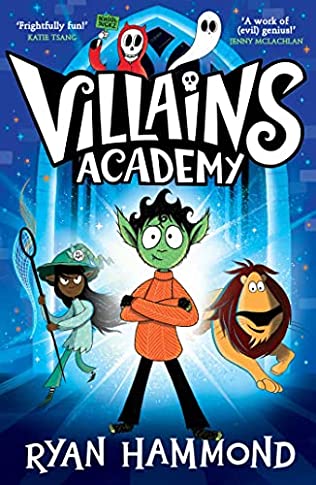 Villains Academy is Ryan's first author-illustrated book to be published by Simon & Schuster Children's. It is not available to buy at the moment as it isn't due to be published until February 2023. This is the first book in a planned series featuring no cute animals but only bad ones at the school full of villains (or is it?). The book is a really light-hearted and fun read that might just give you a boost producing an upbeat feeling. It is an excellent choice for particularly the younger but also the older reader with a big heart.

On the first day at Villains Academy, we are welcomed into class Z with Master Mardybum and his group of students. Each student is hoping to be crowned VILLIAN of the Week. The book follows a group of things - this is really the best way to describe the motley class of characters. One team is called The Cereal Killers and comprises of A Werewolf called Bram, Mona the elf-witch, Bryan the lion, Shelia the ghost, and Tony the skeleton. The other team is called The Overlords and includes Mr Toad, Spike the Snappy Croc, Jeeves, The Tooth Hairy, and MAL the lost.

The teams compete in a mayhem plot that fills the reader with joy, sadness, and a rollercoaster of emotions. Bram needs to find his inner badness to become the villain he's always dreamed of being to win. However, everyone has to work as a TEAM which is easier said than DONE! The book is written in a fantasy, dream-like way as the quirky characters take you on the most wicked and nastiest adventure you could ever think of. It's a school adventure where it's always good to be bad or just to be able to leave in one piece. It's a cracking story full of laughs, wit, sarcasm, and huge dollops of bad smells.

If you dare to enter Villian's Academy be prepared to expect lots of farting as well as illustrations that will delight an explosion of nightmares. It's a fast-page, evil adventure with the most frightening word, are you ready to hear it? "SHUBBLEMEGUMP" .... There, you have been warned. If this sounds like your kind of tasty toes to read then grab a copy as soon as you can. We may see you next time Soony Peeps or will we?