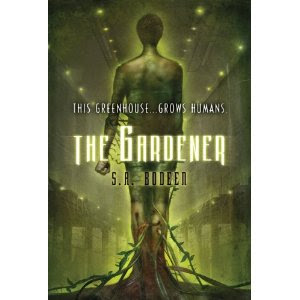 The first book written by this author was  "The Compound", a book I must slot into my 'must read' pile. As this book found praise from all of its readers - a great U.S title for reluctant readers. Now this 'up and coming' author has released her second book, which will be published in May.

When I first got a copy of this book, I never actually read the synopsis. Instead, I was drawn to the book by the cover alone - which only takes an initial glance to capture your attention.
By the first chapter I was intrigued by the story, as I had no idea where it was taking me. But the more I turned the pages, the more the story started to unfold. Infact it left me reading into the early hours of the morning; by which time I had uncovered a thrilling urban Sci-Fi adventure. I was hooked on reading this book until the very end.
The story is told through the voice of Mason, who finds himself caught up in a web of intrigue and adventure, as he stumbles upon a beautiful young girl in a nursing home (where his mother works). This girl finds herself recovering from her coma, when Mason plays a DVD of his father, who is reading a bedtime story. Instantly Mason becomes involved with the girl and eventually he and his best friend sneak her out of the home. This is no ordinary girl though...and Mason soon learns that an insane, utterly science fiction-like conspiracy has been taking place in his own home town for years.
Mason has never known his father, but longs to. All he has of him is a DVD of a man whose face is never seen, reading a children’s book. One day, on a whim, he plays the DVD for a group of comatose teens at the nursing home where his mother works. One of them, a beautiful girl, responds. Mason learns she is part of a horrible experiment intended to render teenagers into autotrophs—genetically engineered, self-sustaining life-forms who don’t need food or water to survive. And before he knows it, Mason is on the run with the girl, and wanted, dead or alive, by the mysterious mastermind of this gruesome plan, who is simply called the Gardener.
This book is fast paced - it only has 232 pages from beginning to end. However there are many twists and turns that keep you questioning the direction of this plot throughout. A key element that is raised involves the questions asked by the author about society and survival - using children as experimental "Guinea pigs" and the rights to a normal childhood. These are all key ingredients to the storyline.
I loved the concept behind the story, which is actually worth reading within its own right. It's woven together by the biological findings of sea snails which gives an original edge to the theme to the story. As well as the idea of autotrophic humans, who don't need to eat or drink, as they are energized by the sun. This is a great read and is certainly a book that I would recommend. It combines emotional tension with gripping reality but with a quirky Sci-Fi edge to it - a big thumbs up!
Books published by Feiwel & Friends (May 25, 2010 - U.S book release)

I read The Compound last spring and LOVED it. I had it at school and when my students were working on an assignment I was sneaking in a page here and there. It was just so intriguing! I've got to read this one now. Several reviewers have liked it.