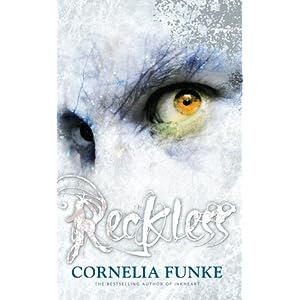 I have always eagerly anticipated Cornelia Funke's new books, since having first read 'Inkheart' and being blown away by it. Since then I have read many of her books and have never been disappointed - at least not yet! Once again this book lives up to the high expectations that have been set . 'Reckless' is an intriguing read - entwined within a world of fairytales, but as to be expected with many unusual twists and turns.

The story begins with Jacob Reckless, who has been visiting another world from behind a mirror, for many years. This world is full of fairies, witches and other fantastical creatures but it 'captures' Jacob - alluring him back time after time to hunt for treasures and attempt unusual quests.
This double-life suits Jacob well, until the day his younger brother Will, discovers his secret. Not surprisingly, he follows Jacob into this other world (perhaps trying to unravel the mystery behind Jacob's long disappearances) but unfortunately with disastrous consequences. Time becomes vital in trying to release Will from the curse that is gradually turning him into stone. Fortunately he is not alone in his quest, as he has Clara (Will's girlfriend) and Fox (Jacob's adoring friend) to help him.

The changes that Will face are portrayed intensely, as the rapid change towards the end sees him develop from the 'lovesick fool' into the hardened warrior. A soldier and protector who becomes unable to distinguish between the enemy and his own brother . . . .
The beginning of each chapter has been illustrated by Cornelia Funke herself. These miniature drawings reflect the feelings of adventure explored within each chapter. The quality is superb, with careful attention to detail - these tell a story in themselves!
At one point in the book, I felt I was actually in the cave with the 'metal Dragon's' that the characters had discovered. I could almost feel myself gripping the sides of the book and clenching my toes as the aeroplane spluttered to life, gradually making its way into the air. This visual portrayal was made possible by the particularly great use of descriptive language.
I really devoured this book. I actually read it over several hours and made myself intensely tired the next day but it was certainly worth it! I think I may need to read it again at some point, in order to really appreciate the minute attention to detail, as I galloped to the end with a ravenous appetite needing to know the outcome.
Book published by Chicken House - U.K and Little,Brown Books - U.S 14 September 2010
By Mr Ripley's Enchanted Books on July 31, 2010

I like this cover a lot more than the cover you posted earlier! I really look forward to Cornelia Funke's books as well, and I can't wait to get my hands on a copy of this!

Now this one. This one has been on my wishlist... it feels like forever. At least since I first saw the trailer on You Tube. Just saw the review on your sidebar - must see if I can bump it up my wishlist.