A new devil has ridden into town with his band of monsters and ungodly creatures. The author has turned his visions into a fantastic debut horror series. The first book "The Dead", will have you running for your life. It is out now, if you want to get your hands on a copy, in order to see what everyone is talking about.
In the meantime, the author and his monsters, recently took a little bit of time out of their busy schedules to answer some questions and tell us more about the book.

Who is David Gatward? Could you tell us a little about yourself?
For my website, I had a go at doing not so much an author biog, as an obituary…
“David Gatward spent a considerable part of his life confusing the hell out of not just himself, but those around him. He spent most of his childhood and teenage years wondering what it would be like to be any one of the following (in no particular order): actor; musician; carpenter; army officer; writer; helicopter pilot, and highwayman. He suffered the usual illnesses (measles, chicken pox, pizza-face acne) and, for an embarrassingly long period of time, was a bed-wetter. He saw his first ghost at 16. At 18 he had his first book published. And saw his second ghost. At 19 he went to college. Four years later, qualified to teach, he went in to publishing. Managing his career with all the skill of a blind sea captain in a hurricane, he ended up in the civil service and ran away as soon as redundancy was offered. Writing took over, thanks to a couple of ghost-writing contracts and, quite to his own surprise, a book deal to write The Dead. The rest, as they say, is history...”
Did you have to wait a period of time before you managed to get your first book published?
I actually had my first book published when I was 18, which is pretty young. It’s subject matter is, I’m sure, going to have people coming back to me with stunned expressions, particularly considering what I write now. It was an astonishing experience; the process of signing the contract, doing the book, seeing it in print. The thrill of that moment has never left me. I got the bug. But that’s nearly 20 years ago now. So it’s taken me a fair while to break in to the mainstream. But then in that time I’ve spent probably thousands of hours working on my writing, my style, my ideas… If someone back then had told me it’d take this long I’d have been stunned (and probably very arrogantly dismissive!), but it’s been totally worth the wait.
Has your writing been influenced by any one person?
No. Not in the slightest. My writing has been influenced by so many things, so many people. I’m a horror movie fan, so everything I write I pretty much visualize as though it’s going to be seen on the big screen. When I was younger, Alan Garner’s books blew me away. But I read so many different styles and genres now; I’ve often got three or four books on the go. At the moment, I’m reading Joe Hill, Andy McNab, Chris Reeve, Clive Barker… But then my writing has also been influenced by the people who’ve helped me with the actual skill of writing; the writer Linda Chapman, editors Ben Horslen (Hothouse Ficton) and Amber Caraveo (Random House), and my agent Philippa Milnes-Smith, to name the most influential.
I see that you have two books (in the Dead Series) that are coming out this year, what can we expect from these?
Bloody, suspense, cliffhangers, betrayal, horror, excitement, sarcasm, friendship, action, revenge, the importance of family… The list goes on and on and on… All I’m trying to do is provide a story that is breathless in pace, hooks the reader, and keeps them wanting more; I’m in this for the long haul and I’m pretty damned excited about building a relationship with my readers, finding out what they think, maybe even using them to help me with ideas, with where the story could go next…
It looks like you also have ideas about book three. Do you find it easy to think that far ahead in the series?
It’s not a case of it being easy, more a necessity! I came up with the basic plan for all three over a year ago, and had some ideas for the following three as well. In the planning and the writing, the ideas change, but it would be impossible for me to approach something like this completely blind. I’d probably explode in panic! And I think I see it as a three act play. I once heard that the way to write is simply this: in the first bit, you put your hero in to a tree, in the second, you throw rocks at him, in the third you try to get him out of the tree. I like that – it’s actually rather clever. Mind you, I do seem to rather enjoy throwing those rocks, even when he’s getting out of the tree…
Is there a particular author that you admire and why?
At the minute, Joe Hill. As Stephen King’s son, he could quite easily have used his dad’s name to get him out there and published. But he didn’t. Instead, he honed his skill, used the small press, changed his name, and developed a serious critical following before anyone really knew of the family connection. His collection, 20th Century Ghosts, is simply beautiful. His writing is, to me, close on perfect. I love it, though it also makes me question what on earth I’m doing! Jack Ketchum’s also pretty worthy of a nod; he really pushes the boundaries of what you can get away with and explore. Clive Barker is so far out there, in terms of both talent and ideas, that he’s pretty much untouchable. Chris Reeve is in the same league, though for a younger audience. I’m also a big fan of Jeanne DuPrau, with her Ember series. Those books knocked me off my chair. Oh, and E. E. Richardson (The Devil’s Footsteps, and The Intruders)… I could go on! 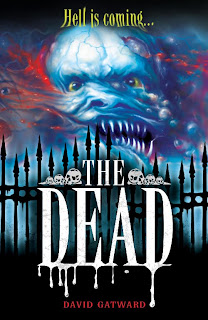 I really like the front book covers, how much direction and influence did you have in the creation of these?
Each one is based on a description of a particular scene/character from the books. I love them all and still feel a little in shock considering the artist; Mel Grant is an amazing talent, is pretty famous for his Iron Maiden album covers, and also did the covers for another rather well known YA horror writer… My favourite of the covers, though, is the one for The Damned… The eyes are simply terrifying!
Do any of the characters represent parts of your personality or represent any of your personal traits?
Lazarus has a water phobia, can’t swim – that was me until a few years back! I think most characters in a book have something of the writer in them, for me anyway, even the horrific monsters. I have to be able to put myself in their position, understand their motivation. And that sometimes involves exploring the darker side of who I am, what I could become, be capable of…
Have you always had plans and ambitions to become a writer or did inspiration strike you?
Yes! Careers guidance never made any sense to me. I was never able to see myself doing something like accountancy or law or management. To me, they were never things you actually ‘wanted’ to do, but things you just did because it was a living. But neither did I buck the system completely and live in a hovel trying to be a writer. I did both; went in to publishing, ended up in the (un)civil service, but through it all, kept my aim and ambition to be a writer. At times it’s been a complete nightmare. In fact, for the last couple of years, I’ve been doing both jobs really; full time employment, including a three-hour commute each day, and writing. It’s been interesting to say the least!
See Book Review http://mrripleysenchantedbooks.blogspot.com/2010/05/david-gatward-dead-bk-1-book-review.html
By Mr Ripley's Enchanted Books on July 04, 2010