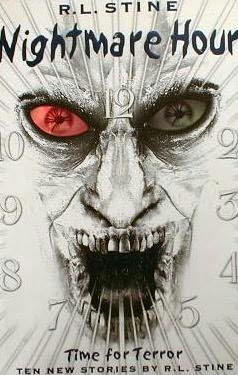 At the age of nine, R.L Stine just wanted to write, and write he did. This author is a writing machine and is known within the literary world as the Steven King of Children's Literature. He is the best selling children's author of all time and has, in the process, sold over 400 million books. In my opinion, he's not as famous as he should be within the UK. Even though most people may have heard of the "Goosebumps" series, which sold in over 40 countries, and contained 25 books in the series. From here, he then went on to write "Give Yourself Goosebumps" and many more chilling stories.

Nightmare Hour consists of ten short stories of the most delicious nature. The author has a natural ability like no other writer. He can weave a tale that will leave you spell bound. These spine-tingling encounters will send a shiver down your spine, no matter what age you are. The author will take you to the dark depths of his genius mind and leave you there. He evokes such a bag of mix feelings that you won't be able to shake them off.

The first story is entitled Pumpkinhead which sets the mood for the following other stories.
The sun went down as I continued my search. The air grew cold. I stopped when I heard a soft thudding sound. I watched as a pumpkin came rolling towards me. It rolled over wilted vines, over the flat, dark field-and stopped at my feet. I stared at it. What had made it roll?
As you start to read, the story gently leads you down the garden path before thumping you on the head; leaving your heartbeat to quicken as the story unfolds.

My favourite story from this collection is entitled "Alien Candy". It is highly original and provokes a feeling of shock, leaving you to run around the room screaming. But as Walter calls his first meeting to order, he begins to wonder if he's made a big mistake. Maybe he should have checked the last minutes of the last Alien Club meeting.


In the next coming months I will be reading many more Stine books on the strength of his short stories.  I will be starting with the "Fear Street Saga" and hopefully, will get into double figures by the end of the year!