Oona Crate was born to be the Wizard’s apprentice, but she has another destiny in mind.

Despite possessing the rare gift of natural magic, Oona wants to be a detective. Eager for a case to prove herself, she wants to show her uncle—the Wizard of Dark Street—that logic is as powerful as magic. But when someone attacks the Wizard, Oona must delve even deeper into the world of magic to discover who wanted her uncle dead.

Full of magic, odd characters, evil henchmen, and a street where nothing is normal, The Wizard of Dark Street will have you guessing until the very end.
Eleven-year-old Neela dreams of being a famous musician, performing for admiring crowds on her traditional Indian stringed instrument. Her particular instrument used to be her grandmother’s—made of warm, rich wood, and intricately carved with a mysterious-looking dragon.

Sheela Chari - Vanished - Published by Hyperion - 26 July 2011
When this special family heirloom vanishes from a local church, Neela is devastated. As she searches for it, strange clues surface: a teakettle ornamented with a familiar-looking dragon, a threatening note, a connection to a famous dead musician, and even a legendary curse. The clues point all the way to India, where it seems that Neela's intrument has a long history of vanishing and reappearing. If she is able to track it down, will she be able to stop it from disappearing again? 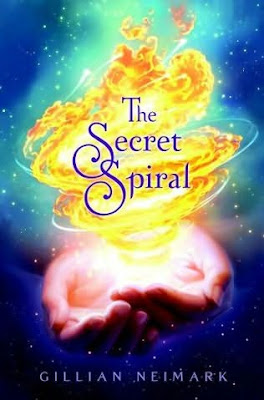 Gillian Neimark - The Secret Spiral - Published by Aladdin - 26 July 2011
It’s just another boring Wednesday in May for ten-year-old Flor Bernoulli of Brooklyn, New York. As soon as school is out she hurries to the popular Sky High Pie Shop down the block, owned by the wonderfully mysterious Dr. Pi. But when she gets there, her life changes forever. Dr. Pi reveals he is actually an ancient wizard, in charge of a very special cosmic fire that keeps nature in balance. Without him, every single thing that has the shape of a spiral—from seashells to galaxies to the inside of your ear—will cease to exist. Flor wonders if Dr. Pi has lost his mind, but then two tall blond strangers from another planet show up, hoping to steal Dr. Pi’s fire for themselves. The adventure of a lifetime has begun. As she travels in time and travels in space, Flor learns that only she has the magic to help Dr. Pi protect the fire, save the spiral, and keep the world spinning just as it should.
Posted by Mr Ripley's Enchanted Books on July 03, 2011

These sound fantastic - I shall be adding them to my library wish-list. Thanks for pointing them out :D