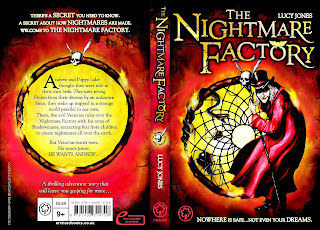 There's a secret you need to know.
A secret about how nightmares are made.
Welcome to the Nightmare Factory.

When Andrew Lake and his twin sister Poppy are stolen from their dreams, they find themselves trapped in a strange realm parallel to our own. There, the evil Vesuvius rules over the Nightmare Factory with his army of Shadowmares, extracting fear from children to create nightmares all over the world. But Vesuvius wants more. He wants power. He wants Andrew...

A thrilling adventure story that will leave you gasping for more: compelling, exciting...and just a little bit scary...

Mike Lancaster - 1.4 - Published by Egmont Books - 7 May 2012
It's a brave new world. In the far future, people no longer know what to believe...Did Kyle Straker ever exist? Or were his prophecies of human upgrades nothing more than a hoax? Peter Vincent is nearly 16, and has never thought about the things that Strakerites believe. His father - David Vincent, creator of the artificial bees that saved the world's crops - made sure of that. When the Strakerites pronounce that another upgrade is imminent, Peter starts to uncover a conspiracy amongst the leaders of the establishment, a conspiracy that puts him into direct conflict with his father. But it's not a good idea to pick a fight with someone who controls all the artificial bees in the world.

In the underground city of Caverna the world's most skilled craftsmen toil in the darkness to create delicacies beyond compare - wines that can remove memories, cheeses that can make you hallucinate and perfumes that convince you to trust the wearer, even as they slit your throat. The people of Caverna are more ordinary, but for one thing: their faces are as blank as untouched snow. Expressions must be learned, and only the famous Facesmiths can teach a person to show (or fake) joy, despair or fear - at a price. Into this dark and distrustful world comes Neverfell, a little girl with no memory of her past and a face so terrifying to those around her that she must wear a mask at all times. For Neverfell's emotions are as obvious on her face as those of the most skilled Facesmiths, though entirely genuine. And that makes her very dangerous indeed . . .

Philip Caveney - Spy Another Dat (Movie Maniacs) - Published by Andersen 3 May 2012
After the thrills and spills of his adventure on Terror Island, Kip is reluctant to allow Mr Lazarus to send him into another movie - but Beth has other ideas, particularly when she discovers The Paramount Picture Palace is planning to show the latest film in the Jason Corder series, Spy Another Day. Its star, Daniel Crag, has always been Beth's favourite screen actor. When Mr Lazarus asks her to obtain Corder's ID card, she agrees to go in and Kip feels duty-bound to accompany her. But what should have proved a simple visit ends in disaster when Kip and Beth are separated and find themselves in different parts of the same film. Can they find their way through all the dangers of a spy movie and defeat the evil genius, Doctor Leo Kasabian, before the final credits roll and they are trapped there . . . forever?


Eddie, Adam and David have the same gift. Separated by generations, they are linked by their ability to time-travel. Using their dreams, they can appear like ghosts, wherever and whenever they want. The first is the genius who discovers dreamwalking. The second is a Haunter, a dream-terrorist, determined to change history foris own ends. The last is the novice dreamwalker who must battle to save his family, and himself, from oblivion.