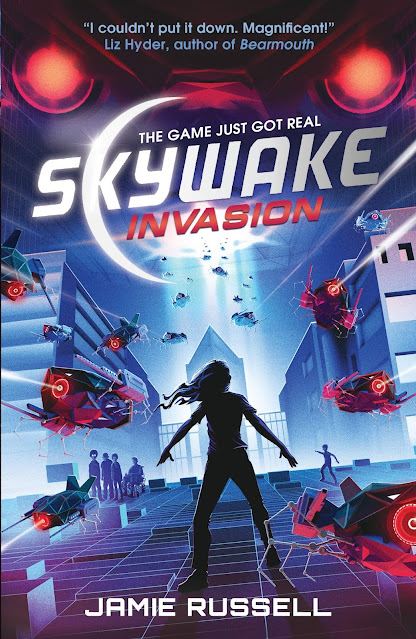 Welcome to the second interview as part of the series of debut authors that we are hosting. It is a delight to introduce Jamie Russell who is the author of SkyWake Invasion which was published by Walker Books in July (2021). This book has been on my personal radar for some time so, it has been a great opportunity for me to ask the author for more information about this book. After reading the fabulous answers, I'm definitely going to be running to the shop to purchase a copy. If you too would like to read this book then you can purchase a copy of the book HERE. If you also have any questions you would like me to ask the author then PLEASE get in touch. Thank you for reading and enjoy!


Unfortunately, I've not yet had a chance to read SkyWake Invasion. What can you say to entice me and other readers to pick it up and read it?

OK, sales pitch alert! SkyWake: Invasion is the first book in an action-packed sci-fi trilogy for readers 10+ about an alien invasion, videogames and what it means to be a leader. I pitched it as a book for kids too busy playing Fortnite to read Harry Potter and I wanted it to be a really immersive, edge-of-the-seat ride.

The main character is a girl called Casey. She discovers that her favourite videogame, SkyWake, is actually an alien training tool designed to train kids to fight in a distant alien war… whether they want to or not. When the aliens arrive to abduct the best players, Casey and the boys on her online team must fight back using everything they’ve learned from the game.

One of my favourite genres is Sci-fi. What ingredients make a good children's Sci-fi book in your opinion?

What I love about sci-fi is that it’s such a huge genre with so many different kinds of stories, from space operas to robots to alien invasions to time travel. We always think about sci-fi as being a window onto the future, but it’s also a mirror of the present. It always reflects ‘now’ back to us, I think, which is why it’s great for young readers. It can be a fun space to explore big issues like what it means to be human or the pros and cons of technology.

What video game would you partner with the story and why?

Space Invaders plays a huge role in the book via a series of flashback chapters about Casey and her late dad, who died in Afghanistan before the story begins. They buy an old retro Space Invaders cabinet and refurbish it as a kind of father-daughter adventure. Her dad teaches her how to get a high score on the machine and also introduces her to the idea of ‘flow’ – that feeling of being ‘in the zone’ when you’re totally immersed in a task, like playing a game, or reading, or exercising. Flow becomes really important to Casey as the SkyWake trilogy unfolds.

When you started to write this book. Did you always have in mind that this would be a trilogy?

One thing I learned as a screenwriter is that there’s really no shame in being commercial. When a company has to invest a huge sum of money in your story, you really need to convince them that they won’t be making a financial mistake! So when I pitched SkyWake I played up its ‘franchise potential’ in the hope of enticing a publisher. In truth, I actually didn’t know how the story would really unfold in Books 2 and 3 beyond a few key plot points. Of course it backfired on me because before it went out on submission my agent asked me to write a synopsis for the sequels. I was on holiday in Wales at the time and had to quickly come up with the plot for the next two books while my kids were shouting at me for working. I find the outlining process really hard, so it was actually a very effective way to get me to knuckle down and do it quickly!

Can you reveal anything that we might not know already about book two?

SkyWake: Invasion ends on a HUGE cliffhanger – so huge that I’ve had complaints! Book Two effectively picks up right where it leaves off. We travel to the alien planet where the gamers are being forced to fight in a war between the evil Red Eyes, who invented SkyWake, and their mortal enemies The Squid. It turns out that the Squid are telepathic creatures who use their powers to create a shared virtual world called ‘The Mindscape’ that Casey and the boys are invited into. It’s a bit like being inside a videogame. Also, warning, Book 2 also has a cliffhanger of an ending… #Sorry #NotSorry

Knowing you are a climate activist, are any of your characters likely to be an activist and what would they be campaigning for?

It’s funny because until recently I never saw any parallel between doing climate activism and SkyWake, but then people who read the book started pointing it out to me. The theme of the book is leadership and what it means to be a leader. But I’ve realised that the story is really about kids facing an apocalyptic event that totally upends the world they know. They have to learn how to work together to fight back, because the adults can’t or won’t do it for them. That isn’t a million miles away from what’s happening in reality with the school strikes and Greta Thunberg. I really feel like kids are being forced to take on this huge responsibility because my generation has failed to listen to the science. The boys on the team are quite a diverse bunch so I think they’d all have causes they’d get behind – from Scottish independence to disability rights.

We love book covers at Mr Ripley's Enchanted Books. In my opinion, this is an excellent cover. Can you tell me who the illustrator is and what your personal thoughts are about it?

I absolutely love the cover! It’s so different from many of the other middle-grade books out there. I especially like the way the image at the very top works as both a spaceship and the face of one of the Red Eyes from the book. It’s a real trompe l'œil. The artist is Matt Griffin who is hugely talented and does lots of sci-fi posters and book covers. You can check him out at https://www.mattgriffin.online

There's quite often a lot of negative press about video games and the impact they can have. What are your thoughts and experiences about this?

This is something I’m really passionate about. I even do a talk for schools called ‘Why Videogames Are Actually Good For You and Can Help You Read More Books (Guaranteed To Convince Your Teachers)! I’ve been playing videogames since they first arrived in the 70s (yes, I’m that old) and I’ve seen the medium grow and mature over the decades. If you play videogames for ten hours a day, you will turn into a zombie. But as part of a ‘healthy diet’, videogames are full of positives – they encourage decision-making, problem-solving, team-work, spatial awareness and can even get you to read more. SkyWake is a love letter to gaming really, from Space Invaders to Fortnite.

How do you relax in your spare time?

I love books and games (boardgames, role-playing games, videogames, anything!). I live in Shropshire and my idea of heaven is walking across the Shropshire hills with the family and the dog then returning home for a game of Ticket To Ride or Betrayal At House on the Hill. 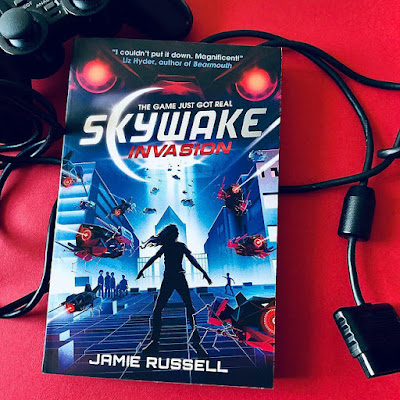