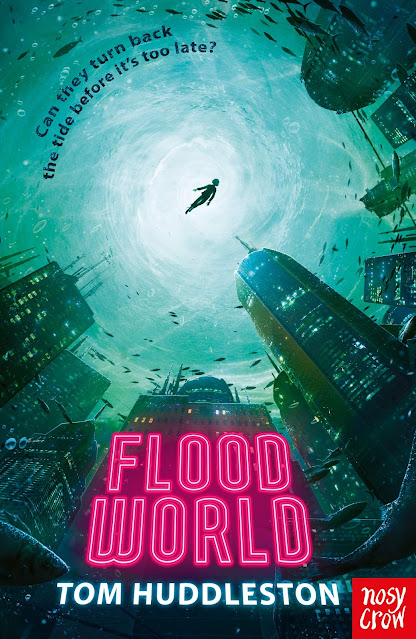 Are you ready for another brilliant interview? Well, we hope the answer is yes to that question! Today we're delighted to welcome the multi-talented writer and musician Tom Huddleston. He's the author of the fantastic dystopian FloodWorld trilogy published by Nosy Crow books. This series is one of our favourites as it is one of the best that we have read for some time. It was an absolute delight to be able to ask Tom some questions about his book and writing career so far. Anyway without further ado, thanks for taking the time to read the post; we hope you have a great week.
The FloodWorld books were by far the most fun and satisfying to write, because it was my story, my ideas, my characters, my world. Writing Star Wars books was amazing, obviously, and I also loved writing books set in the Warhammer universe. But nothing can beat creating my own future.
I wanted to encourage readers to think about climate change and what the real cost could be - as the title implies, the books are set in a flooded future, in a city half-sunk beneath the waves. They're also about inequality and exploitation, how some people will use a disaster to grab more wealth or power for themselves. Those are pretty heavy topics, but what I didn't want was for the books to be depressing, or a slog to read - I wanted them to be exciting adventure stories, full of action and friendship and hope. And yes, it went according to my own plan - some might argue that I ought to be treating these issues more seriously, but personally I think a hard lesson is easier to learn if it's presented in an entertaining fashion.
I'm working on a couple of different things - my first non-fiction book, which I can't really talk about, and my first novel for adults, which is quite a daunting task! But I've also just submitted the first draft of a new book for teenage readers, another real-world dystopian adventure story, so we'll see what happens there. And of course I'm still working on the Cosmic Creatures series of fun sci-fi stories for younger readers, they're a real pleasure to write.
My childhood remains a huge influence on my writing - I don't think you can write for or about kids without drawing on your own childhood experiences. In many ways I think I'm still a kid - I mean, I spend my days dreaming up stories rather than getting a proper job. As for books, I was a big fantasy fan, I read The Lord of the Rings repeatedly, alongside the Earthsea books and the work of Susan Cooper, Alan Garner, people like that. But I read pretty much anything that was put in front of me, to be honest.
I don't think you can beat Star Wars as a series, particularly The Empire Strikes Back, it's a perfect film. I don't like every single one of the movies, but it's such a rich and detailed universe that's always fun to revisit. But my absolute favourite sci-fi movie, indeed probably my favourite film of all time, is Close Encounters of the Third Kind. It's so rare to find a film that's intensely thrilling without resorting to violence or scares, it's all about optimism and wonder. Honestly, watching it comes close to being a spiritual experience for me - maybe I just want them to come and take me away!
I have a pretty big record collection that I've been working on since I was a kid, I got my first record player when I was six and I've spent most of my spare money on vinyl ever since. But in recent years I can only afford new records if I sell a few old ones - writing isn't exactly a lucrative profession! As for hobbies, I play in a band called The No Sorrows - you can find our album on Spotify! - and watch a lot of movies. But to be honest, my main hobby is also my job - writing books. I'm very lucky to be able to say that.
You can buy the books HERE.
Email Post
Labels: Action Adventure Dystopian Flood World Interview Interview 2022 Nosy Crow Q&A Sci Fi Fantasy Tom Huddleston Trilogy