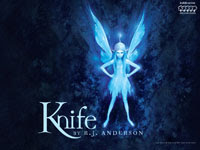 Forget everything you think you know about faeries. . . . And buy this book.....

Creatures full of magic and whimsy? In this accomplished debut novel....

It's like the Borrowers in the land of the faeries. Great book with Lot's of imagination with great main character's. Recommended read to everyone and his faerie.

Deep inside the great Oak lies a dying faery realm, bursting with secrets instead of magic. Long ago the faeries mysteriously lost their magic. Robbed of their powers, they have become selfish and dull-witted. Now their numbers are dwindling and their very survival is at stake.

Only one young faery—Knife—is determined to find out where her people's magic has gone and try to get it back. Unlike her sisters, Knife is fierce and independent. She's not afraid of anything—not the vicious crows, the strict Faery Queen, or the fascinating humans living nearby. But when Knife disobeys the Faery Queen and befriends a human named Paul, her quest becomes more dangerous than she realizes. Can Knife trust Paul to help, or has she brought the faeries even closer to the brink of destruction?

R.J. Anderson was born in Uganda, raised in Ontario, went to school in New Jersey, and has spent much of her life dreaming of other worlds entirely.

As a child she immersed herself in fairy tales, mythology, and the works of C.S. Lewis, J.R.R. Tolkien and E. Nesbit; later she discovered more contemporary authors like Ursula LeGuin, Patricia A. McKillip and Robin McKinley, and learned to take as much pleasure from their language as the stories they told. Now married and a mother of three, Rebecca reads to her sons the classic works of fantasy and science fiction that enlivened her own childhood, and tries to bring a similar sense of humor, adventure, and timeless wonder to the novels she writes for children and young adults.

Soon to be published in the U.S under a different title. (Faery Rebels:Spell Hunter)
Release date 1 June 2009 by HarperCollins. Out now in the U.K.
By Mr Ripley's Enchanted Books on March 26, 2009