New Paperbacks Books For May 2009 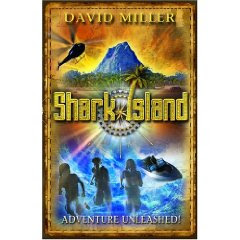 Some more new titles for the great month of May 2009

Taken from their home in Pakistan to work in the Persian Gulf, eight-year-old Rashid and his little brother Shari cling to each other. Then they are separated and forced to become jockeys in the lucrative camel-racing business. Rashid is starved and worked to exhaustion by harsh supervisors - but he has a talent for racing and quickly becomes his stable's star jockey. Soon he begins to forget what life was like when he had a proper home. He almost begins to forget about Shari.

Matt Cruse is back for his most dangerous expedition yet - into outer space! Boy-pilot Matt Cruse is looking forward to spending a peaceful summer with Kate de Vries. Until they are offered the chance of a lifetime to join the first expedition into space aboard the incredible ship Starclimber. But many challenges stand in the way: passing the gruelling tests to become astralnauts; facing attacks by fanatical Babelites opposed to the space race; and the unknown dangers that could be lurking in space. They will have to fight all the way. And even if they survive the journey into space, will they be able to return?

Hanna, Ned and their parents are on the holiday of a lifetime on the paradise island of Kaitan. But the idyll is shattered when pirates come in the night, burning their house and kidnapping their mother and father. The children are stranded, and don't even know if their parents are alive or dead . . . In this action-packed adventure, there is no one to help. Survival and escape are up to Hanna and Ned.

Fella and Grebe have grown up on an island, believing that the world beyond its shores is toxic and that the islanders are the lucky survivors of a cataclysmic disaster. And then Fella, an orphan, discovers a diary, hidden fifteen years ago by his mother - a woman who seemingly came from the Outside, from a world not run by the Officiate. This revelation seems incredible, but it gives the two friends hope that they can escape the brutality of their lives. Yet when, after a gripping chase, they manage to get off the island, what they discover is a shock. Not only is the Outside alien and frightening, it forces them to understand the appalling truth about where they have come from, and why they were there. An up-to-the-minute thriller about what makes us who we are.

Recipe Ingredients: A small town called Elbow; rain; five loony kids; one bad dog; a jar of Herman's Red Devil Chilli. Bring ingredients together, add a real-life dead body and a missing eyeball, and have yourself one crazy, red-hot adventure. The Pickle King is about that wonderful belief children have in finding something extraordinary behind even the most boring. It's a terrific, highly original, sometimes scary, deadpan funny read. It stars a gang of unl ikely friends thrown together one wet summer in the small town of Elbow, famous for only two things: chilli pickle and rain. Already bored, they hope something will turn up, but what noneof them expect is a real-life dead body with a missing eyeball! Soon the mystery of who killed Herman, owner of the giant pickle factory becomes a crazy adventure. That these kids have guts will take on a different meaning in this fabulous, zany debut.


As he plummets down a subterranean void, it looks like the end for Will Burrows. But it’s just the beginning of a new adventure as he comes up against giant carnivorous spiders and the deadly Brights, and far worse than any of these ... a pair of twelve-year-old girls with a score to settle.


Mortal affections and faery rivalries continue to collide in the town of Huntsdale, as New York Times bestselling author Melissa Marr takes urban fantasy to new heights. After the terrible events of Ink Exchange, the Dark Court has a new ruler. But will Niall's kindness survive his new responsibility to the most violent of Faerie courts? Meanwhile, Seth and Aislinn attempt to mend their relationship. But Aislinn is the Summer Queen and Keenan is her king -- and as summer approaches, their chemistry sparks. Will Seth's mortality lose him the one thing he loves above all others? As Niall seeks to control his new Court, Aislinn attempts to resist the seduction of summer, and Seth searches desperately for the gift of immortality, a delicate balance is threatened, and a terrible plot is revealed!
By Mr Ripley's Enchanted Books on March 13, 2009