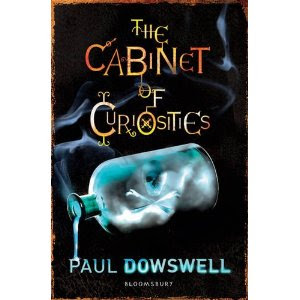 The room was like a vast repository of missing treasure troves. It was impossible to take in what he was seeing. Every one of the thousands of things that assaulted his senses would have made a fabulous ornament and endless talking point for anyone who possessed it.
The story begins with a chilling experience, between the two main characters, Lukas Declercq and Etienne Lambert.  Their circumstances have thrown them together and as a result they end up as travelling companions. However they are robbed at knife point, alongside a number of other travellers, some of whom are killed. They flee for their lives as they travel towards the city of Prague, however this leads them into more danger and deceit.
This colourful story unfolds into a fantastical adventure. I loved the stunning portrayal of Ancient Bohemia, which the author describes in a memorable way. The great detail and historical facts are skillfully interwoven with fictional events - clever storytelling is achieved in this way.
The story is action packed and takes you on a journey, which shows the twisted underworld of life during the reign of Emperor Rudolph II. The insightful window into his life depicts a most interesting view.
The dark unrest within the book leaves an underlying current. This absorbs the reader; placing them on the very edge of tension until the end. Torture and killing, without any conscious recognition, is compelling to the core.
Lukas Declercq is orphaned, his uncle summons him to Prague, a refuge for Europe's greatest alchemists and natural philosophers, offering to take him on as an apprentice. Uncle Anselmus is court physician to Rudolph II, the reclusive and unstable Emperor. He is also curator of Rudolph's bizarre Cabinet of Curiosities, a series of vast rooms stuffed with wonders and scientific marvels such as a nail from Noah's Ark, phoenix feathers and monstrous freaks of nature, which fascinate Lukas. As Rudolph retreats further into his fantasy world, the threat of rebellion hangs in the air. Dorantes, a diplomat from Spain, comes with his daughter, Celestina, on a mission from Philip II to persuade Rudolph to give up his heretical ways. But he discovers the court is full of diplomats who have been waiting months or years for an audience with the Emperor. Dorantes notices how some had wormed their way into the Emperor's favour by presenting him with fantastic gifts for his Cabinet, and sets about creating a device that he says will stop time. But it works only in the presence of the Emperor. Lukas knows the terrible truth behind Dorantes' mission. But sinister forces have plans for Lukas too, and before he can thwart the plot against the Emperor, Lukas must gamble on Celestina's loyalty in order to save his own life.
This is a great read; I hope there is a lot more to come. I feel we need more books like this - the characters deserve at least one more outing! However in my opinion, there's a lot of scope for many more books.
Book published by Bloomsbury 5 July 2010


Other books by author: