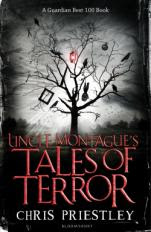 Welcome to Day 2 of Chris Priestley's blog tour to promote the re-issue of the three Tales of Terror books in paperback. I was fortunate enough to read these when they were first published and have been a fan ever since. However, these newly published books have added bonus material that the earlier books didn't contain. Therefore, if this doesn't tempt you, then read below to find a feast of fantastical insights into the Tales of Terror which surely will instead.

About five or six years ago, I was asked if I would like to come up with a spooky series for younger children.  ‘Sure,’ I said.  ‘I can do that’.
But it turned out that I couldn’t.  That is, I could come up with lots of ideas that I thought they might like, but nothing that I actually wanted to put my name to.  I had no urge to get all Scooby-Doo.  The more I thought about it, the more I realised that I either wanted to write something genuinely scary or I didn’t want to do it at all.
I had always loved creepy short stories – not just horror stories, but sci-fi and fantasy; everything from Saki to Kafka, M R James to Ray Bradbury.  Many of these writers are unclassifiable.  Or at least they refuse to be constrained by bookshop boundaries.  I’ve always sought out writers like that and I am a big fan of what one might call ‘uncanny’ stories.
I had notebooks full of my own stories – or rather the bones of stories, waiting for the flesh to be put on. They had all been conceived with adults in mind, but looking at them again I could see them working with child protagonists. . .
And so, Uncle Montague’s Tales of Terror came into being.  He is called Uncle Montague as a nod towards M R James (Montague Rhodes James) and the idea of having a narrator came from various portmanteau horror movies I saw in my teens.  Dead of Night is probably my favourite.
Television was as big an influence on the Tales of Terror as anything I read.  The Lawrence Gordon Clark adaptations of M R James had a big impact on me when I saw them as teenager.  Movies like The Innocents and The Haunting – movies that I first saw on TV as a teenager, were models of the kind of effect I was trying achieve.
The setting for Tales of the Tunnel’s Mouth is a lift from the BBC’s adaptation of Dickens’ The Signalman, another Lawrence Gordon Clark mini-masterpiece.
The Tales of Terror series owe their existence to a lifetime’s addiction to the weird and uncanny in comics, books, television and movies.  I hope I’ve shared some of that passion with you and I hope my readers may seek out some of those books and movies that so inspired me.


Next on the blog tour is Writing From The Tub


Thanks to Ian at Bloomsbury for including my site in this blog tour and for Chris in writing such a great post. I hope it inspires you all to pick up this series of books and read some spooky shenanigans. Go on if you dare ....!

Timothy Power said…
Tales of Terror from the Black Ship is one of my absolute favorite books of all time. :)
3 March 2011 at 02:23