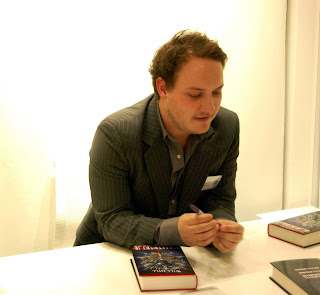 I feel both privileged and honoured that Will Hill has requested a visit to this particular blog site as part of his brilliant Department 19 tour. Having written such an appropriate blog post for this site, I have been incredibly excited to be able to share this with everybody.
As the author of the brilliant debut horror book 'Department 19', which is centred around the classical Victorian world of Vampires, I feel that this is one of the best books to be published this year.
I would like to thank both Will and HarperCollins for organising this blog tour and for choosing this site as one of the stops.
Here is Will explaining why the North East has been a great inspiration for the setting of Dept 19. . . . . .
When I was seven years old, my mother and my stepfather and I moved from a tiny market town in Lincolnshire called Spilsby to Gateshead, the squat, grey city that faces Newcastle from the other side of the River Tyne. When I was twelve, almost thirteen, we moved again, to the only place apart from London that I’ve ever considered home.
On the north sea coast lies a small town called Tynemouth, which is lovely and sunny and full of surfers and holidaymakers in the summer, and freezing cold, grey and desolate in the autumn, winter and spring. I spent endless long, dark afternoons beneath the cliffs that separate the town’s long beach from the bay beneath its priory, on a vast, uneven landscape of rocks and freezing pools. It was where my friends and I would hang out, where we could be pretty confident of being undisturbed; the rocks were treacherous underfoot, and the cliffs were overhanging and crumbling. We huddled in the caves at the feet of the cliffs, shivering as the wind blew hard off the open sea. For a teenage mind that was reeling from its first exposure to Clive Barker and, particularly, Stephen King, it was a fertile breeding ground.
My parents and I would holiday in Northumberland, in places that feature in Department 19 and its sequel – Alnwick, Bamburgh, Dunstanburgh, old, wild places full of history, much of it violent and frightening. Castles stood along the coast, staring out at waters that are grey and calm now, but that once held the constant prospect of danger.
Down the coast in north Yorkshire, the fishing town of Whitby stands proudly as the place where Count Dracula first landed in England, leaping down onto the sand in the shape of a dog, leaving behind him the empty Demeter, its crew missing, apart from the captain, whose body is lashed to the helm. Inland from that legendary place lies the vast, otherworldly radar complex of RAF Fylingdales; the enormous ‘golf balls’ that were visible from miles and miles away when I was a child are now gone, but the place still feels secret, and spooky. It was no surprise at all to me when I realised I was going to place the Northern Outpost of Department 19 there.
When I started writing Department 19 I knew where it started (the Prologue and the first three chapters were the first things I wrote) and I knew how it was going to end. Well, that’s not absolutely true – there were aspects of the ending that didn’t occur to me until later. But what I absolutely did know was where it was going to end. It was always going to be Lindisfarne.
I only visited the small tidal island a couple of times when I was young, but that was more than enough to capture my imagination. I couldn’t get my head around the idea that the causeway that links it to the mainland was submerged for long periods of each day; the sense of isolation, of being cut off from help, which I would eventually have the villain of Department 19 exploit so cruelly, was palpable, even then. I changed the geography of the island, which is one of the most beautiful, picturesque and friendly places you could ever visit in real life, and rebuilt the monastery that had once stood there to suit the horrors that I knew were going to take place there.
Lindisfarne had seen horror before. The Viking raid of 793AD was described as follows by the Anglo-Saxon Chronicle:
In this year fierce, foreboding omens came over the land of Northumbria. There were excessive whirlwinds, lightning storms, and fiery dragons were seen flying in the sky. These signs were followed by great famine, and on January 8th the ravaging of heathen men destroyed God's church at Lindisfarne.
More than a thousand years later, I wanted to bring that fear, that sense of the unnatural, of invasion by the unknown, back to the small island that loomed large in my imagination when I was a child. It doesn’t deserve what happens to it in Department 19, but the world isn’t a fair place.
It’s dark, and cold, and there are monsters. Here is my Book Review 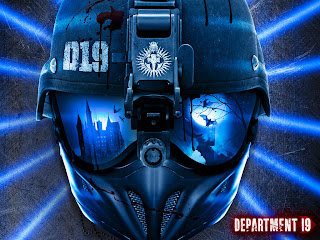 Ynysawdre Elderly Residents Association said…
Great post and really adds to the scenery in my imagination form Department 19. Thanks
8 April 2011 at 09:20

Carmen said…
Oh am gnashing on my knuckles now to know what DID happen to it!