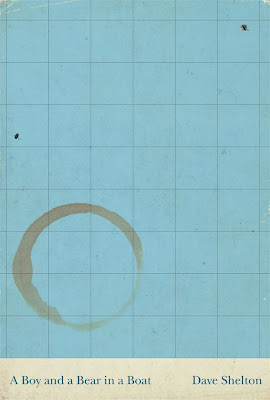 A boy and a bear go to sea, equipped with a suitcase, a comic book and a ukulele. They are only travelling a short distance and it really shouldn't take long. But then their boat encounters 'unforeseeable anomalies'...
Faced with turbulent stormy seas, a terrifying sea monster and the rank remains of The Very Last Sandwich, the odds soon become pitted against our unlikely heroes. Will the Harriet, their trusted vessel, withstand the violent lashings of the salty waves? And will anyone ever answer their message in a bottle?

'He looked past the bear. There was still no sign of land ahead of them. But there was no sign of the land they'd set out from behind them either. In fact in every direction all he could see was sea and sky. He looked at his watch but it showed exactly the same time now as it had when they had set off. He held it to his ear but it was silent.'

A Boy and a Bear in a Boat is a very unusual book. The storytelling is calm, rich and surprising - much like the sea on which the Harriet journeys. A sea which stretches on past the horizon but which also seems to extend and grow onwards - like the journey that the boy and the bear are making together. The boy is curious, impatient and definitely not impressed with the boat's captain. But the bear rows on, at ease with their progress and routine. Mostly. The habits that the bear relishes - taking tea, singing along to his ukelele, and ever rowing onwards - puzzle, disgust and delight the boy in turn. Their story is one of hilarity, trouble and glee. ..And then there is The Very Last Sandwich to contend with.
By Mr Ripley's Enchanted Books on February 02, 2012