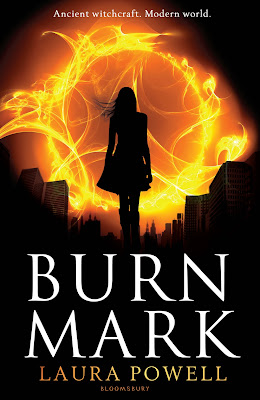 The walls of the Burning Court were high and white-tiled, its ceiling one giant chimney. If the young witch at the stake had been able to look up the funnel, she might have glimpsed a distant pane of sky.
Instead, she stared ahead. There was a glass panel in front of her, and the shadowy shapes of the inquisitors behind. One of them would have his hand on the switch, ready to light the fuse.

She couldn’t speak or move. Her body had been frozen rigid by the drug they’d given her so that she would be numb and immobile throughout her execution. Her reflec- tion in the glass was calm. Everything was quiet and orderly, exactly as it should be.

In which case . . . should she be aware of the coarse material of her prison shift, or sense the chill coming off the shining tiles? Propped up in the centre of the pyre, she was newly conscious of the weight of its wood.
The witch’s heart began to stammer. This wasn’t right. Something must have gone wrong. The drug wasn’t working properly. She had to let them know before it started. She had to tell them, she had to explain –

But her tongue didn’t move. Her eyes were locked open, her mouth was locked shut. The fear was suffocating, but she couldn’t gasp for breath. Her face in the glass gazed peacefully back, while every nerve, every muscle, every pulse of her heart and brain screamed STOP.


A thin yellow flame wriggled into life, then danced upwards. Smoke rose with it. Heat blossomed, intensified.
Behind the blurred glass, the unseen audience was waiting.
Somebodyhelpmeohgodpleasestopstopstop
Tendrils and coils of fire. Her eyes stung from its smoke. Her pale hair was already rippling into flames. At any second they would be eating into her flesh. She was screaming and screaming now, soundlessly –

Burn Mark is the first of a captivating new series of thrillers with a fantasy twist. In a world where witches are the persecuted underclass and inquisitors the ruling power, a shared destiny forges an unlikely alliance between the children of two ancient enemies.

Glory is from a family of East End witches that was once feared and respected. She is desperate to become a witch herself and restore their reputation. Lucas is the privileged son of the Chief Prosecutor for the Inquisition, the witches' mortal enemy. Becoming a witch is the worst thing that could happen to him, but it does, and on the same day it happens to Glory. The unlikely allies must overcome their differences as they are thrown into the centre of a conspiracy that could destroy their lives.

Think Witch Child meets The Sopranos meets Spooks and you have a flavour of what this incredible book is all about. Laura Powell has used her extensive research into the history of witchcraft to create a convincing alternate world where mortals and witches coexist. This is a truly impressive novel from a talented writer new to the Bloomsbury list.

Oooooh! This one sounds SO good. Have you read it yet?