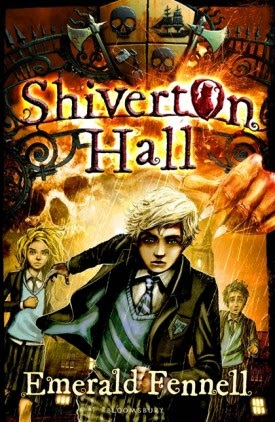 It is always a delight to be sent a book that you really want to read. Therefore, I was amazed when this book fell out of it's white envelope and into my eager little hands. I got stuck in straight away and never looked back. Emerald Fennell, an actor who starred in the Channel 4 adaptation of Any Human Heart, has now turned her hand to writing. The book will hit the shelves in January 2013 - it should easily stand out amongst the other books with its fantastic eye-catching book cover. It's a firm winner with me and a job well done by the Bloomsbury team.

Shiverton Hall is the fantastic setting for this book. Steeped in tales of curses and evil, its chequered past proves to be very dark and macabre. I was drawn to this immediately, like a ghost floating through a haunted house. However, the current role of this building is to house the Coleman Scholarship for Academic Excellence. This delivers an interesting slice of school life drama which felt quite similar to the Andy Mulligan series of books (Ribblestrop). I have been led to believe that the author takes her inspiration from the friendly, quiet ghost that lives with her in London! Perhaps we all could benefit from one of these, especially when reading the quality of the synopsis......

They slowed as they reached the gate; two stone columns, each with its own crumbling angel perched on top. The angels held up a rusty, wrought-iron arch that read, in curling, serpentine letters: SHIVERTON HALL. Arthur Bannister has been unexpectedly accepted into Shiverton Hall, which, as it turns out, is an incredibly spooky school, full of surprises. And it is just as well that Shiverton Hall has made its offer, because Arthur had a horrible time at his previous school, and was desperate to leave. Timely indeed . . . But Arthur has no time to worry about the strange coincidence. He is too busy trying to make head or tail of Shiverton Hall, dogged as it is by tales of curses and bad fortune. At least there are a few friendly faces: George, who shows him around; also Penny and Jake. But not all the faces are friendly. There are the bullying Forge triplets for starters. And then there is the acid tongue of the headmistress, Professor Long-Pitt, who seems to go out of her way to make Arthur's life a misery. Luckily Arthur has his new friends to cheer him up. Although there are some friends that you don't want to have at all, as Arthur is soon to find out.

This is a great story that will send shivers of phantom terror rushing down your spine. It has been written for the 9+ range or grown ups, who are still young at heart, like me! This is one of those books that you just won't be able to put down. Even if it means having to hide under the covers in order to get to the end of each page. You will be blown over by its spirit, dazzled by the horror and hooked by its tale, this book will spirit you away!

I hope that this review hasn't spoilt the story for you and has wet the appetite instead. I feel that we definitely have a great new voice that will be unleashed into the book world next year. A fantastic plot driven adventure that is full of enough mysterious intentions in which to fill a cupboard. I'm really excited about this one - it has left me quivering with anticipation for the next book. I hope I won't be left for too long in such a state!