Debi Gilori - The Tobermory Cat - Published By Birlinn Ltd (12 Oct 2012)
Once upon a time, in Tobermory on the beautiful isle of Mull, there lived a cat. Now, all around Mull were cats - some were wonderfully soft and woolly, some were great singers, others were experts in fishing and some were superbly sulky. Tourists flocked to see them and hear them, but in Tobermory the cats were just cats. One cat decided, though, he was going to be special to help the people of Tobermory but he found it was harder than he thought. That was until he got some very good advice from some special friends.

Chris Riddell - Alienography 2: Tips for Tiny Tyrants - Published By Macmillan Children's Books (13 Sep 2012)
Join Chris Riddell and Colin the alien as they explain their tips for intergalactic domination. Learn how to select a simpering sidekick, how to choose an evil outfit (a good vest is a must!) and how to buy the best battlecruiser . . . you'll be a butt-kicking baddy before you can blink! Magnificently illustrated and hugely funny, with novelty elements including a mini comic, a fold-out cross-section of the 'Centennial Turkey' spaceship, and a 'Top Chumps' card game.

Jon Klassen - This Is Not My Hat - Published By Walker (9 Oct 2012)
When a tiny fish shoots into view wearing a round blue topper (which happens to fit him perfectly), trouble could be following close behind. So it’s a good thing that enormous fish won’t wake up. And even if he does, it’s not like he’ll ever know what happened. . . . Visual humor swims to the fore as the best-selling Jon Klassen follows his breakout debut with another deadpan-funny tale.
Take a look at the YouTube Book Trailer. http://youtu.be/IhbYyEdYWY8 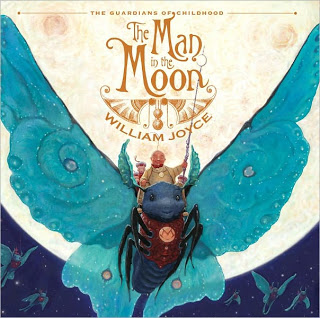 William Joyce - The Man In The Moon - Published By Atheneum Books for Young Readers (13 Sep 2012)
Of course you know the Guardians of Childhood. You've known them since before you can remember: Santa, The Tooth Fairy, The Easter Bunny and the others. But ...where did they come from? How did they became beloved, and worthy of holidays? Embark on the first of seven very different journeys, starting with the Man in the Moon's, the very first of the Guardians. Join William Joyce on his latest adventure-to the Moon and discover the legends of The Guardian of Childhood.
Check out the website:
http://www.theguardiansofchildhoodbooks.com/mim.php