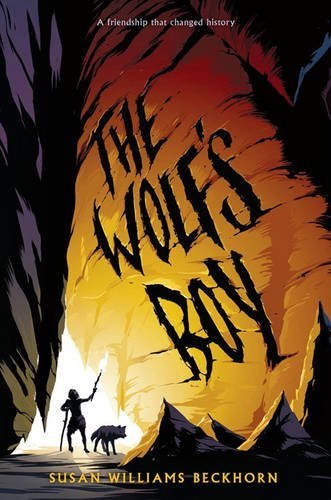 I'm really pleased to be sharing with you the following interview with Susan Williams Beckhorn, author and illustrator of some amazing children's books. The Wolf's Boy is her latest book which was published in June 2016 by Disney-Hyperion in the US. To find out more about this cracking read, click on the following book review link from School Library Journal. I hope this inspires you to pick up The Wolf's Boy and have a read...

1.Can you tell us a little bit about yourself?
I grew up near Boston, Massachusetts as the youngest of four in a pretty average white family. Sadly, I did not have a cruel stepmother, nor was I dressed in rags or beaten. I did however have books, which I read walking to school, under the lid of my desk during math class, brushing my teeth, and of course, under the covers by the light of my electric blanket control after the flashlight was taken away. I like to tell kids that a dreadful thing will happen if you read too much: you will become a writer. It’s sort of like inhaling and exhaling.

After art school, I married my sweetheart, Fred, and we became hippie-back-to-the landers here in western New York. We built our own stone house, which we still live in 36 years later, and raised two very entertaining daughters, Fern and Spring. At the moment we have two dogs, two cats, two horses, and one rooster—the only survivor of a recent raccoon massacre. We grow most of our own vegetables. Fred farms and builds furniture. I manage our AirBnB rental cabin, and write. He does wood, I do words.

2. How would you describe your latest book "The Wolf's Boy" to potential new readers?
I like to say that THE WOLF’S BOY is a story that’s been waiting 20,000 years to be told. It’s about a friendship that changed history: the bond between man and dog. After writing WIND RIDER (Harper Collins 2006), a “first horse” story which takes place 6000 years ago in what is now Kazakhstan, I decided that I wanted to do a “first dog” story. During the research phase, I contacted Mark Derr, author of HOW THE DOG BECAME THE DOG, to ask where I should set my story. He answered, “The first domestication of the dog could have taken place in China, or the Middle East, or perhaps southern France—where they found the fossilized footprints of a boy and a canine, apparently walking side by side in Chauvet Cave.” Chills ran up my spine. My story of an outcast boy and a young wolf against an Ice Age winter grew out of that chance remark.

Chauvet Cave was discovered in 1994, but never opened to the public so as not to repeat the disaster of Lascaux. As a relatively unknown children’s writer, I knew I would not be allowed inside Chauvet. Instead, I got a copy of the breath-taking book, THE DAWN OF ART which was put together by the discoverers of the cave and Werner Hertzog’s film, CAVE OF FORGOTTEN DREAMS, both of which document what are thought to be the oldest paintings in the world. Then in April of 2013, my husband and I travelled to Europe. We visited the Neanderthal Museum in Germany where I gleaned ideas for my character, Oooni. We went to the Dordogne valley where we were able to enter several caves still open to the public, view Crow Magnon art and know the mysterious aura of these sacred places. And we climbed to the opening of Chauvet, gazed at the beautiful Ardeche River Gorge with its awe-inspiring stone arch, and felt what it must have been like in Kai’s time.
3. Is anything in your book based on real life experiences or purely all imagination?
Even though the story is prehistory, many things in it come from my own life. As one can see on the dedication page, I’ve shared my life with a lot of dogs. I think right away of the scene where Uff comes to Kai in the blackness of the cave and he doesn’t know at first if it is she or the bear. One moonless night, as a young adult, I was walking a trail in the woods in New Hampshire, trying to prove to myself that I wasn’t afraid of the dark. Suddenly I heard a big animal running toward me. There was a moment of fear until I knew in my heart that my German Shepherd, Jessica, had come after me. I put out my hand in the blackness and felt her wet nose and greeting tongue.
And the opening scene, when Kai is pinned by his brother, who threatens to spit on him by letting a string of saliva hang from his mouth—well let’s just say I had two old brothers. I can’t remember now which one was guilty.

4. Do your characters seem to hijack the story or do you feel like you have the reigns of the story?
I have to say that I got so deeply into Kai and Uff’s story that I almost began to feel that it was true. It is true in many ways.

5. If you could cast your characters in the Hollywood film adaptation of your book, who would play your characters?
Kai should be played by a young Leonardo DiCaprio. Uff might have been played by my second German Shepherd, Genny, if she’d had a more golden coat and been a bit wolfier looking.

6. Have you written a book you love that you have not been able to get published?
I have written a sequel to WIND RIDER, but because the Laura Geringer imprint closed at Harper Collins before I finished it, it’s never been published. I love the story. It’s really more of a second generation companion piece, a clash of cultural/religious views that parallels what goes on so sadly in the world today, and a sweet little romance to boot. I still have hopes for it!

7. Which famous person, living or dead would you like to meet and why?
Aside from Jesus and Ghandi (whose October 2nd. birthday I have always felt honoured to share), I’d really love to have been able to meet and spend time with Mark Twain. I am awed by his humor, his humanity, and his genius. Oh jeepers, now I need to read him some more!

8. What are your thoughts about how to encourage more children to read?
Turn off the electronics and read to them. A lot. As long as they will let you—into adulthood if possible! Play audiobooks in the car. Always read the book before the film. Be seen reading by your child.

9. Where did your love of books/storytelling/reading/writing/etc. come from?
My parents read to us at bedtime, in the car, at camp where we had no TV. My brothers both had dyslexia, so my mother read a lot of their summer reading list books to them—which was not a bad thing at all. I listened. My oldest brother, Ted Williams, who is an environmental journalist (Audubon, Fly Rod and Reel, etc.), sometimes told my sister and me stories during our naptime on the porch at the camp in New Hampshire. That was magical. No spitting involved!

10. What project are you working on now?
At the moment I’m in the research phase of a new MG novel. I don’t like to talk about stories very much until I have something written, but sometime in prehistory there will be a dog and a girl in a canoe in the Caribbean. . .

Anonymous said…
Fantastic interview, and superbly fascinating to hear about the research/background information for The Wolf's Boy. The bond between dogs and humans is somehow both so simple and so complex. I also enjoyed hearing Beckhorn's thoughts on encouraging your kids to read--I agree that it's so important to continue to read to children even after they aren't children anymore.
7 September 2016 at 20:02