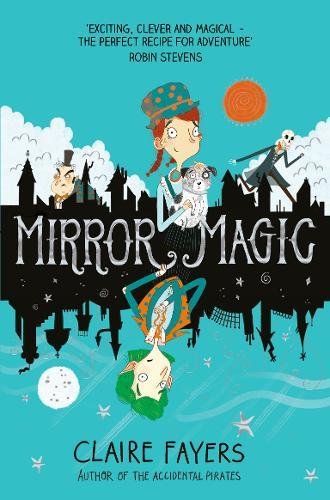 Today we have the wonderful Claire Fayers visiting Mr Ripley's Enchanted Books. We are taking part in the Mirror Magic blog tour - please see the list of stops at the bottom of this post. This tour has been a fantastic opportunity to ask some teasing questions about the book and Claire's writing career.

Mirror Magic was recently released on the 14th June 2018 and has been published by Macmillan Children’s Books. It's a cracking magical adventure, so please check out my book review HERE.
How would you describe Mirror Magic to reluctant readers to encourage them to pick it up and start reading?
I don’t blame you for not liking books. Books are annoying. They’re grumpy, they complain all the time and they never tell you anything useful until it’s too late. At least, The Book in Mirror Magic is like that. The Book can see the future, and the future does not look good. The magic that connects our world with the fairy Unworld is about to go terribly wrong. Maybe your chair will come to life and eat you, or maybe an Unworld skeleton will hunt you down and drag you off to the fairy dungeons. If The Book’s new guardians don’t find out what’s happening and put a stop to it, the whole world could end.

You probably ought to read Mirror Magic, you know, just in case the world does end. You’ll want to be ready for it.


Mirror mirror on the wall. Pick any character in the book and tell me what they would see when they looked into the magic mirror?
Ah, I’m going to cheat a little here. The town of Wyse has six magic mirror and if you look into any of them you’ll see the same thing – a bored fairy receptionist waiting to hear what you want.
But then, twelve-year-old Ava Harcourt arrives in Wyse, and when she looks into a mirror – just a plain, ordinary mirror, not even magical – she sees something she definitely shouldn’t. She sees a fairy boy who is just as surprised to see her. And that’s when the trouble starts.


Welcome to Wyse. What enchantments are placed on the reader when they visit Wyse?
You have to be careful in Wyse as nothing is how it seems. Fairy enchantments can only change appearance, but they are used everywhere. Your hotel might be painted pale blue one day and bright yellow the next. Your room will probably look twice the size it really is so you’ll keep bumping into the walls. You can buy enchantments to make you look taller, shorter, older, younger, fatter, thinner. You can turn your hair green and your nose purple. Make sure you visit the theatre, where the Wyse conjurors take it in turns to perform magic shows. If you’re lucky, you might even get to ask a fairy a question – just don’t trust the answer.


Tell us about the writing process, how do your ideas take shape?
The idea for Mirror Magic came from a conversation with my agent and the story changed a lot as I wrote it. I started with a picture in my head of a carriage rattling along a street and all the buildings were shimmering. From there I spent ages wrestling with Ava – of all my characters, she was the hardest to pin down. Was she rich or poor, where did she come from, was she alone at the start or with her family? Once I got that sorted, I wrote the first few chapters and an outline for my editor, then I set to work finishing a full draft – at which point Charles suddenly appeared shouting, ‘Hey, I want to be in the story too!’ And Charles is a great character so I put him in and hoped my editor wouldn’t notice (she did!)

The whole thing, as you see, was quite chaotic – a lot more chaotic than my last two books (The Accidental Pirates) where I had a clear sense of the story right from the start. Maybe it’s because Mirror Magic is more mystery than adventure, and I had to uncover the mystery myself before I could write it.


What predictions do you think the grumpy old book would make about the real world?
I’ll tell you what predictions I’d like to see.
A big increase in funding to schools and school libraries so every school can have a qualified librarian and an exciting stock of books.
Regular storytimes become part of every school, and parents, excited about books, read with their children.
Public libraries reopen with great celebrations. People flood in and whole shelves are left empty as books are borrowed.
Everywhere, people are inspired to share their own stories. And, as we do, we see that the world is a bigger, more wonderful, more various place that we had ever imagined.


Which actor would you like to see play the lead character from your book and why?
This is the point at which I have to admit I watch very little in the way of film and TV and I’m hopeless at remembering actors. But I adore Studio Ghibli films – the Japanese animation studio that produced Spirited Away, Howl’s Moving Castle and many more. I think Wyse, with its mixture of real world and spooky magic would make a perfect setting for a Ghibli film. So please, if anyone from the studio is reading this, come and visit Wyse.

Where is your favourite place to write?
I have two places. First, at home, where I have my own office with doors onto the garden and bookshelves all the way round the walls so I write surrounded by my favourite books. Then, roughly twice a week, I take my laptop and meet fellow author, Peter Bell, in The Coffi House near Roath Park in Cardiff. The staff are lovely there and they do great coffee. Peter and I sit in near silence for two hours and just write.


I love the book cover, which has been brilliantly illustrated by Becka Moor, do you think that the book cover has an important role to play as part of the buying process?
I am so pleased with the Mirror Magic book cover and incredibly lucky to have Becka. Yes, I think the cover plays a huge role in attracting readers. I know everyone says ‘don’t judge a book by its cover’ but most of the time the cover is the first thing you see. Straight away it gives you an impression of the kind of book this is, who it’s aimed at and whether you’ll like it. A good cover will make sure the right readers pick up your book.


How important are stories to you? What do you like to read?
Stories are hugely important to me. When I was growing up, they gave me somewhere to escape to. Now I see stories as a fundamental part of who we are. They comfort us, inspire us and connect us one to another in a way nothing else can.

I’ve always been drawn to fantasy, sci-fi, and adventure. I’m a big fan of Stephanie Burgis and Frances Hardinge, I love Sophie Anderson’s ‘The House with Chicken Legs’, and I nearly fell off my chair laughing at Lissa Evans’ ‘Wed Wabbit’. But I also love it when I discover a book I never thought I’d enjoy – such as ‘Kick’ by Mich Johnson. I have zero interest in football but the book really isn’t about football at all, it’s about hope and dreams and how stories drive us to keep going.

For Mirror Magic, I re-read a lot of Victorian gothic. They’re set a bit later, but I wanted to capture the claustrophobic feel of a gothic mansion. And they’re all fantastic reads. 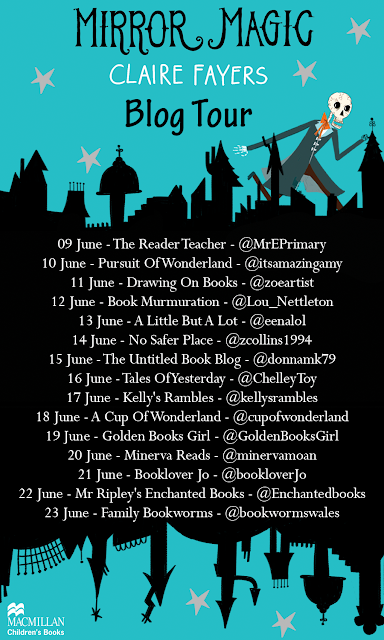 Claire Fayers was born and brought up in South Wales, an area of the country sadly deficient in dragons. Having studied English at University of Kent, Canterbury, she built a successful career writing short stories for women’s magazines until the lure of magic became too much and she wrote The Accidental Pirates: Voyage to Magical North. It was selected for Waterstones Book of the Month and shortlisted for the FCBG Children’s Book Award 2016, and its sequel, The Accidental Pirates: Journey to Dragon Island, was published in 2017. When she’s not writing, you’ll find Claire at her allotment. Mirror Magic is her third book with Macmillan Children’s Books.
You can find out more about Claire on her website – www.clairefayers.com
Or why not follow Claire on twitter – @ClaireFayers
By Mr Ripley's Enchanted Books on June 22, 2018