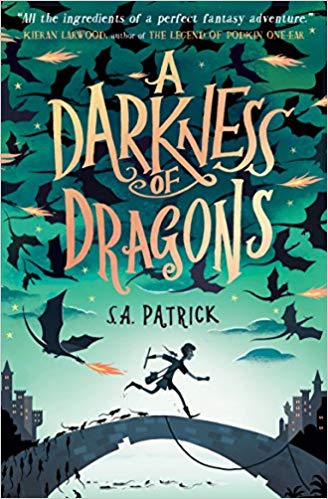 After playing a forbidden spell-song to save a village from rats, 12-year-old piper Patch Brightwater is thrown in jail. But there he meets Wren – a noble girl under a rat-shaped curse – and together they befriend Barver, a fearsome dracogriff, and set off on a grand adventure filled with sorcerers, dragons, bandits…and one very deadly enemy.
From the depths of the Tiviscan dungeons to the highest peak of Gemspar Mountain, this stunning book reminds us of the soaring joy of adventure, the captivating danger of magic, and of the delight of finding friends in unexpected places.

Since the middle ages, the story of the Pied Piper of Hamelin has been passed down from generation to generation. The story originated from the days of the plague and has possibly changed in many ways since then. S. A. Patrick has based his story on the world of the Pied Piper and weaved a magical inventive story that incorporates the basic essence of that original idea. He has made it into a new modern-day fairy tale that will be loved by many for years to come.

A Darkness of Dragons will be Seth's first book for children. It is set to be published on the 6th September 2018 by Usborne Publishing. The book is around 400 pages and is a substantial read. However, the very start of the plot has the power to place the reader in an adventure that will leave them gripped and hooked incredibly quickly. "The screams of the children brought the villagers running" and the readers too.

The first character to love is Patch; the story really starts with this character. Without spoiling anything too much, he joins up with two more major characters. There is Wren, a girl cursed to live as a rat, and big bold Barver, a fire-breathing Dracogriff. All three characters in the book have personal journeys that they undertake but they all, inadvertently, link together. As a result, the three accidental heroes take us on an epic journey captivating our fantasy hearts as they go up against one epic villain.

The story is deeply immersive and has all the magical ingredients that I look for in a great book. A fantastic fantasy plot that pops and pings full of action as well as humour and heart, especially from the characters. It has a very pacey storyline full of creative imagination including spell-slinging, shape-shifting and fire-breathing battles. The split narratives will keep the readers on their toes. It has a lovely dark edge to it that slowly creeps into your soul - often slapping you in the face with horror like moments that will thrill and excite the reader in more ways than one.

This is set to be a great new series for readers age 9 and upwards. With the next installment eagerly expected around mid-2019. So why not take up the quest by picking up the book and reading it. You will not be disappointed as it is full of twists and turns with a cracking climatic and up-lifting ending that will make you want more.