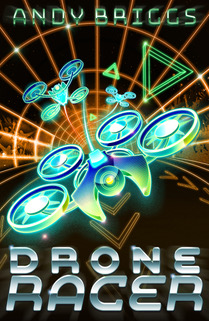 It's brilliant to have Andy Briggs on Mr Ripley's Enchanted Books today to answer some questions on his latest book - Drone Racer. The book was recently published on the 6th September 2018 by Scholastic books in the UK. It's probably the first book to feature the sport of Drone Racing. Technology and gadgets are blended together in an action-packed story that will thrill all. I'm a very big fan of Andy's books as he always delivers super narratives and engaging fast-paced stories that everybody will love regardless of age and gender.

Can you tell us about Drone Racer from a film directors point of view?
Drone Racer is an idea that I always felt fitted into those feel-good movies from the 1980s… but set now. I was brought up on sci-fi-adventure stories, such as ET, The Last Starfighter, My Science Project, Batteries Not Included, Flight of the Navigator, to name just a few. I wanted this to be that kind of story, one you would expect Spielberg to make during the height of those classic Amblin Films.
With young protagonists, shadowy villains, and an artificially intelligent racing drone, my aim was to create an adventure my readers would love to experience themselves.

Describe this book in ten keywords
An action packed childhood adventure for geeks of all ages.

What makes Drone Racer an exciting read for children and why? Do you think adults will also love it?
Ultimately, as a creator I enjoy writing about worlds I know (at least in my head!) and adventures I personally would love to have. Drone Racer is very much that labour of love. Set against the canvas of the emerging new esport of drone racing (yes, it’s a real sport around the world, with very real prizes!), readers of all ages will experience a new, yet familiar world.
We enter the story through our three drone racing team members, Carson, Trix and Eddie, who are ordinary kids. Carson lives with his estranged father, Eddie is a bit of a geek who never seems to fit in, and Trix is an engineering genius –a girl who is shattering a boy oriented world. When they discover an artificially intelligent drone called Vanta, they embark on a spectacular adventure that takes them around the globe… as a mysterious force pursues them…

Has technology inspired you to write this book? If so, how?
Most of my books revolve around technology. My pervious series, THE INVENTORY, was about the world’s greatest gadgets hidden from the rest of the world and it allowed me to combine my two joys – cool tech and travelling the world!
With Drone Racer, I had the opportunity to focus the entire book on the wonderful world of quad-copters – drones to you and me. It's a technology everybody seems to know about. They have been one of the most popular Christmas presents over the last few years and when I am on a school tour and ask the kids who owns a drone, I am amazed by the number of hands that go up. It’s pretty incredible.
When I discovered drone racing as an emerging esport, I instantly saw a brilliant arena in which to set a story… I just needed a story.
We’re all used to talking to our phones and home hubs, so why not drones. And what if they not only answer back, but have personalities of their own? That’s when I realized I could push the technology further by making Vanta artificially intelligent; turning her into a real character. It was a joy to blend tech with a fun main character!

What is your favourite gadget?
I suppose it would have to be the thing I use every day, my mobile phone. But I am tending to use the phone less as a phone, and more for assisting in using even better technology. I use it to fly a drone (of course!), via a headset so the screen becomes the view point of the drone’s camera. I’m now also using it with more and more augmented reality apps because that’s going to be the next big thing…

If this was ever made into a film which actors would you choose to play the lead characters in the book and why?
Carson, Trix and Eddie are all young, so there are not that many actors who would fit the bill (although I have seen some amazing youngsters in the theatre lately). I think finding new talent, as they did with Harry Potter, would be the way to go. But for our bad guy, I always had one person in mind… the awesome Rachel McAdams. I’m not going to tell you too much about the villain… but she’s it!

We know you have a passion for 80's and 90's films. Which film do you think would work the best if it featured a Drone in a revamped version and why?
Ha! Brilliant question… the obvious one is Batteries Not Included as the little space aliens in there are, kinda, drones. If Goonies had a modern makeover then they would definitely have some kind of tricked out drone to help them on their adevnture!

I really love the book cover as it is very appealing, what are your thoughts on it? Do you think good book covers play a big part in the way we choose books to read?
The old saying, “you can’t judge a book by its cover”, is true. But that doesn’t mean people don’t do just that. These days it’s less the kids who are judging the covers but the retailers, such as Waterstones, who now – quite wrongly – have a say on cover design.
I have to say, when I first saw the cover I was instantly taken back to the covers of my old Commodore 64 games (for young readers, that was a computer that had a whole 64k of memory. K, not Gb, and for that you got dozens of levels of coolness, music and animation. Now a similar game will take up a hundred Mbs on my phone!). It was as if I was looking at a cover from my past that was strangely also futuristic!


What tips would you give children who are interested in writing a sci-fi fantasy adventure?

There is no such thing as a bizarre idea! Just go away and write it, and don’t worry if it seems too futuristic. The chances are, when your twice as old, your sci-fi idea will start becoming a reality. We need pioneers to think ahead, to try and second guess how the world will change – and we could all do with more adventures in our lives. If we can’t have them now, then let’s read about them.
Twitter: @abriggswriter
Website: www.andybriggs.co.uk
By Mr Ripley's Enchanted Books on September 26, 2018