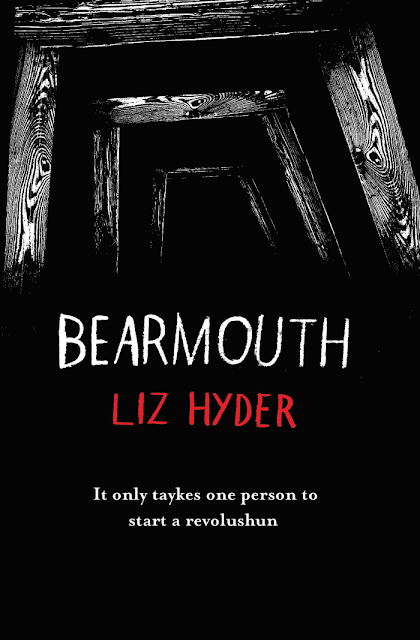 Today, I have a review for a powerful debut book by Liz Hyder. The book will be published on the 19th September 2019 by Puskin Press. It's aimed at a young adult audience from the age of thirteen upwards and has one of the more intriguing synopsis you will find this year.  The book cover will certainly inspire any reader to pick it up this autumn.

The story is both bold and brave, in my opinion. The plot is told from a young person's perspective - a character called Newt. The story is written in the language of his learning of letters and words. Some of the words need to be worked out as it's told more or less phonetically.  However, this gives the reader thinking time and makes the dialogue a little unique; it's a nice workout for the mental brain! The nature of the book is very dark and matches the character's surroundings deep down in the mine. There are some graphic scenes of death and other adult themes in this book, so it holds no punches for the reader as emotions see-saw up and down with the narrative.

The story is very atmospheric and gripping. It's an epic journey into the unknown and has been written with great intelligence through a powerful and descriptive plot. The book and the characters question their beliefs as they fight the religious tyranny and social injustice they find down the mine. The working conditions are brutal and dangerous (the book explores the themes of child labour and Victorian-style working conditions). However, the bravery, courage, and friendships which are formed along the way, hit the reader with a beacon of light in a place of total darkness.

As you follow resourceful and clever Newt through his day-to-today adventures, the candlelight flickers on the reader with hope and justice for him and his fellow friends and workers. The story has some lovely twists and turns to uncover the truth as they conquer their fears in a claustrophobic environment.  It's a brilliant and thought-provoking piece of writing that you will not be able to put down. It will shock you, grip you and punch you in the fantasy face as Newt's perspective will pluck at every reader's hearts leaving each one feeling very emotional. What a great reading discovery full of gritty realism in a bygone world! Don't delay - pick it up and enter the world now.

Book Synopsis: Life in Bearmouth is one of hard labour, the sunlit world above the mine a distant memory. Reward will come in the next life with the benevolence of the Mayker. New accepts everything - that is until the mysterious Devlin arrives. Suddenly, Newt starts to look at Bearmouth with a fresh perspective, questioning the system, and setting in motion a chain of events that could destroy their entire world.In this powerful and brilliantly original debut novel, friendship creates strength, courage is hard-won and hope is the path to freedom.
Read more
Posted by Mr Ripley's Enchanted Books on August 30, 2019