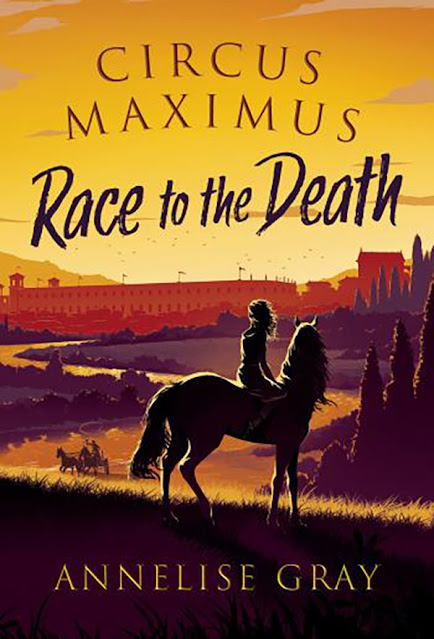 Enter the arena and welcome twelve-year-old Dido, who dreams of becoming the first female charioteer, at the great Circus Maximus. The book Circus Maximus: Race to the Death has already been published by Zephyr Books on 4th March 2021. It is set in Ancient Rome and has both historical and strong female character interests.
I'm delighted to have a brilliant interview with Annelise Gray below to find out more about this intriguing book. We really hope you enjoy this as much as we did and that both the book and setting come alive for you as you read this Q&A. If you have already been fortunate to have read this book then we would love to know your thoughts. Equally, please get in touch if you have any questions. Otherwise, thanks for reading and have a great day.

1.When and where did you get the idea to write Circus Maximus: Race to the Death?

The inspiration was seeded when I was a quiet child with an obsession for pony adventure stories. My favourite was Enid Bagnold’s National Velvet, which is about a girl called Velvet Brown who wins a horse in a raffle and dreams of riding him to victory at the Grand National. The idea proper for Circus Maximus: Race to the Death came to me about six years ago when I was watching a Formula One race on TV. I was thinking about the lack of female drivers and suddenly had the image of my main character Dido. I envisaged her as a cross between Velvet Brown and Lewis Hamilton – a brave, scrappy girl, living in ancient Rome and hoping to break into the all-male world of chariot racing. It took me several years to really commit to writing the book though – I was very busy with my teaching job. In the end though, Dido kept calling to me and I knew I had to go back.

2.How would you describe the story to potential readers?

An action-packed, mystery-laced historical adventure about a girl, a horse and an impossible dream…

3.Dido dreams of becoming the first female charioteer. When writing her character, how did you inject realism into it? What do you think it would be like to be a girl in Roman times?

It’s a very hard question to answer, just because we know so little, relatively speaking, about the experience of being a girl in antiquity. Women’s voices are almost entirely absent from the Roman literary record – what we know about them is framed in terms of the ideal expected from them by society. So I find it hard to say what it was like to be a girl in Roman times other than that if you were to take me back there in a time machine and ask me to live as one, I’m pretty confident I’d hate it – the lack of freedom and education for a start, as well as the expectation that you live according to the rules made by the male members of your family. One thing that might make it bearable is if you had good friends and there is some evidence for close female friendships in Roman society – something which incidentally, Dido lacks for much of the book. She is an outlier, really, able to live outside the usual societal norms for a number of reasons. The first of these is her age - she’s only twelve when we first meet her, just shy of the typical age for marriage. Another is her class - her father Antonius is a trainer and ex-charioteer, which placed him a long way down the social pecking order and the usual hierarchies might not have mattered so much in that world, which allows Dido the leeway to run wild around the stables where Antonius works at the beginning of the book. Having said that, being a charioteer was most definitely not an acceptable ambition for a girl and both Antonius and Dido know that and accept it (very reluctantly in her case).

4.What kind of research did you do to recreate ancient Roman times? How accurate have you been with the history of this time period?

I have a PhD in Classics and I used to work as a research assistant to authors and TV companies on books and dramas about the ancient world. So although I was keen to avoid the book feeling like a history lesson disguised as a novel, achieving a high standard of historical accuracy was important to me, particularly when it came to conjuring up the world of chariot racing. For that, I drew on a wide range of sources to create as authentic a portrait as possible, including accounts by Roman writers which give us a taste of what it was like to be in the crowd watching a race and the fanatical behaviour of some of the supporters. One of the latter was the Emperor Caligula, who features as a character in my book and really was an obsessive fan of the Green racing faction, as I describe him. Images from ancient art give us our best idea of how the chariots were designed and what the charioteers wore, while we also have inscriptions which tell us the names and colours of the horses and the career statistics of the best drivers. Other sources such as Roman recipe books helped to paint a picture of the sights, tastes, colours and smells of Dido’s world.

5.Are there any Roman facts that you know that people might be less familiar with?

In terms of the events described in the book, I think readers might be surprised by the echoes between modern and ancient sporting culture. The most successful charioteers were huge celebrities in Rome. People would follow them around the city and even Emperors could get obsessed – Nero is supposed to have cut his hair in the same style as his favourite racing driver. There was a healthy trade in sporting merchandise and you hear about people buying clothes for their children in the colours of their favourite team.

One of my absolute favourite morsels of evidence that I came across when researching Race to the Death was a chariot games token that was found in the grave of a young girl. It evokes such a powerful image – the idea that maybe this girl loved watching the races and her family buried it with her as a keepsake of a happy day.

6.This is your debut book, what was the writing process like for you?

Race to the Death is my first children’s novel although it’s not the first book I’ve had published. About ten years ago, I wrote a non-fiction account of the women of imperial Rome and a few years after that I wrote a crime novel set in the Roman Republic (both for the adult market and written under the name Annelise Freisenbruch). But the writing process was different for all three books. For this one, I had to learn a new craft. I took plenty of wrong turns along the way and it was a long process, but I also found it a joyful and satisfying experience overall because I finally felt as if I was writing in my true author voice after many years of trying to figure out what that really was.

7.I believe you might be writing another book connected to this one. What have you learned from writing the first book that may help you write the second?

I am indeed in the process of writing the second in the Circus Maximus series, which will cover the next chapter of Dido’s story. I didn’t really contemplate writing a sequel until I’d finished Race to the Death. Two things I’ve learned are not to include a character unless they have a job to do moving the story forward (several got cut during the edits of Race to the Death) and also to really think about the emotional journey for the characters and try to express that on the page. I didn’t include enough of Dido’s inner voice in earlier drafts of the book and my amazing editor Fiona helped me draw that out.

8.I'm a massive fan of a hardback book. What do you most appreciate about the production of the book?

My publisher, Zephyr, takes great pride in producing books that are beautiful to look at as well as read. I fell in love with the cover as soon as they showed it to me. It’s designed by Levente Szabo and I adore the sense of yearning and aspiration in the way the Dido figure is looking at the Circus in the distance, but also the atmosphere of danger and darkness in it. The little hints of gold are also exquisite, they weren’t there on the proof copy and were the most gorgeous surprise when I took delivery of the final book.

9.During this pandemic what has helped you through any difficult times?

I am incredibly lucky to live in a beautiful, rural part of England and being able to go out for big walks in the open countryside definitely helped my sanity. I’ve found writing extremely difficult at times over the last year – almost tortuous. Cooking is always therapeutic for me and I’ve blithely and willingly sacrificed my waistline for my sense of well-being. Whatever the day throws at you, it’s helpful to know there’s a nice meal, a little glass of wine and a good TV show to watch at the end of it.

10.Could you share some of the favourite books that you own?

I’ve already mentioned that the book which inspired Circus Maximus: Race to the Death more than any other is National Velvet by Enid Bagnold. I am embarrassed to confess that I removed the copy from my school library when I was about ten and I have never given it back. It’s sacred to me.

Probably my favourite fiction title of all time is I Capture the Castle by Dodie Smith. More than any other book I can think of, it absolutely captures the uncertainty, idealism and heartache of growing up, all of which I identify with hugely.

My desert island book though is actually How to Eat by Nigella Lawson. I bought my copy when I was at university and just learning to cook. It’s incredibly tatty now and covered in food stains. But I read it and re-read it like a novel. (Favourite recipe of many: the chocolate puddings on page 187. Eat ‘em and weep).