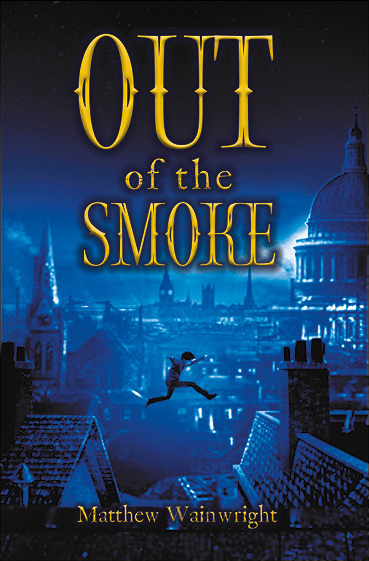 Welcome to our second guest post. The first was by Philip Womack talking about his forthcoming Young Adult book WILDLORD which will be published this October. The second post (below) is by Matthew Wainwright and talks about his debut book OUT OF THE SMOKE being published in a national pandemic. It's a brilliant post about facing a new set of realities. Thank you Matthew for taking the time to write this post.
If you fancy reading this brilliant book and want to support the author and small publishing company then you can purchase a copy from Waterstones HERE
Equally, you can order it from your local independent bookshop which will perhaps encourage more bookshops to stock it. Thank you for reading and we hope you all have a great day.

Debuting in Lockdown: Expectation vs Reality

Every aspiring author dreams of landing a publishing deal. For many of us it’s our entire reason for existence. We can spend so many hours daydreaming, picturing how it will happen and building up the moment in our imagination, that when it finally comes there is usually an alarming jolt as expectation violently collides with reality.

For me, this jolt was twofold. Firstly, my deal was not with a Big Five publishing house, was not for a six-book series, and was not attended by a nationwide publicity campaign. Instead (and probably in common with most authors) I signed with a small independent label, for a single book, with the expectation that I would shoulder at least some of the responsibility of spreading the word about it.

And actually, this was fine. I was excited about the prospect of talking to people, drumming up support, and whipping up a bit of excitement. I have a background in graphic design, and was looking forward to flexing some pixels on social media and beyond. Being with a smaller publisher meant I had more direct contact with my editor and more editorial input; I was even allowed the opportunity to design my own cover (for better or worse).

But then the second jolt hit. On the 23rd of March 2020 England went into a national lockdown, closing schools and bookshops across the country and, in one fell swoop, cutting off the two main avenues I had been counting on to carry the bulk of my publicity. My book was due for release at the end of October, so it seemed likely things would be open again by the time it was ready to land in people’s hands, but it was still a huge blow to my pre-publication timetable.

To cap it all, this was my publisher’s first foray into YA novels, and they spooked a little. Not enough to pull the book, but enough to scale back the release to two stages: an initial limited release in October as planned, online and to selected bookshops who already stocked their titles; and a later, wider release once things had calmed down.

At first this seemed like a killing blow. I had been looking forward to walking into Waterstones and seeing copies of my book on shelves, and somehow my success or failure as an author was bound up in this image. Having a limited release, especially being largely online, felt fake, as if I wasn’t a ‘real’ author. I was afraid that poor sales and a lack of publicity would put my publisher off the idea of pursuing further titles. The dream had soured.

I swallowed my disappointment. After all, what else was there to do? I redoubled my efforts online, firing up Photoshop and running a cover reveal on Instagram over the course of two weeks in the summer, as well as teasing extracts of the book along with the gorgeous chapter header illustrations. I shelled out some of my own cash to promote Facebook and Instagram posts, encouraging people to preorder from the publisher and Amazon, and the response was encouraging. Not overwhelming, but enough to make me think that maybe there was still hope.

October came around. I received my first author copies, and held (and smelled!) my own book for the very first time, feeling a muted thrill of the heady excitement I had long dreamed about. Preorders were not staggering, but still respectable, and my publisher was happy. Reviews began to trickle in, and they were universally good. Everything had gone about as well as could be expected.

And there, I think, is the point: the release of my first book was not an earth-shattering moment, but then it was never going to be. Reality can never live up to expectation; things are never as incredible or dreadful as we think they are going to be. Sometimes life takes us by surprise, but it’s surprising precisely because it happens so rarely. I was always going to be a very small fish thrown into a very large sea, and sink or swim I was unlikely to make very large waves. Releasing in lockdown gave me a reason to temper my expectations and ration my hope. Even very small things, the fewest words of praise or encouragement, felt incredibly precious to me. Every win was a big win, because the odds were suddenly so astronomically high.

Since October my publisher has gradually begun to cast their net wider. We’re reaching out to schools, and I’ve begun to develop a pack of learning resources. Home educators have been a surprising customer base, and word of mouth has done what it does best in that community. I have one virtual author visit booked in for the Easter holidays, and a handful more pencilled in with various schools for when “things get better”. My daughter dressed up as one of my characters for World Book Day, and the headteacher at her school emailed me to thank me for the copy he received in the post. My old primary school tweeted about how they looked forward to having me in. Small things, but each one of them precious and beautiful. The bookshops are still closed (for now), but that’s fine with me. I’m concentrating on building relationships with teachers and home educators, and I know that things will progress in their own time.

Now I look back on it, I realise my expectations had never been realistic — I had been dreaming the dream, rather than visualising the future. Had I not released in lockdown, I might have been immensely disappointed with the exact same things I have come to cherish: the small messages of thanks, the gradual outreach to schools, the slow accumulation of feedback.

This was not a disaster: it was merely an alternative. As it stands, I am probably a happier author for it.