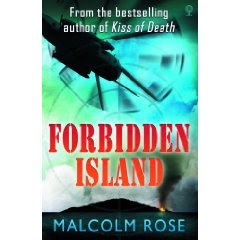 Mike and his four friends ignore the clear warning sign. They decide to explore the mysterious island that doesn’t appear on any map. Not realizing how dangerous it will turn out to be, they stumble across a deadly secret. Alone and stranded on the island, they become the next victims of its terrible history.

It’s a world of conspiracies and cover-ups, twists and turns, revelations, and some shocking science.

‘This compact, tense and gripping story begins like an adventure for readers of eleven or so, but its serious political themes, moral dilemmas and physical outcomes make it best suited to a teenage readership. Although the cause of the danger lies 70 years ago, it is the behaviour of present-day security services and the government which drives the story, and makes it highly topical in a society where the balance between national security and individual rights and freedoms is a living issue. Forbidden Island is a very good thriller, fast-moving and highly readable. It is also a thoughtful and effective parable of modern Britain.’ Books for Keeps.

‘What starts as a traditional adventure story - four wealthy kids go out on their boat and discover an island unmarked on their maps - soon develops into a much more complex and chilling thriller. The island where the teenagers become stranded after a helicopter destroys their boat is contaminated - and if they don't escape they will die. Based on the true story of Gruinard island off Scotland, this pacy read asks uncomfortable questions.

About the author
I  began writing stories while I was carrying out research at York for my DPhil degree in chemistry. Writing became a means of escape from everyday life. While I was at York, my then girlfriend (now wife) read my efforts and commented that I ought to try and get something published. I had never thought of writing as anything other than a hobby. Besides, as I thought then, a budding chemist couldn’t possibly be any good at it! Anyway, I joined a writers’ club to find out how to submit a manuscript to a publisher and, to cut a long story short, found a publisher in William Collins for my first novel, Rift.