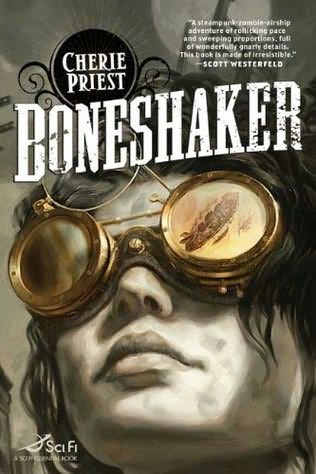 
This is a new author to me and I was interested to read the book after visiting another website. The synopsis sounded very good and I loved the last 'SteamPunk' adventure I read.
The book is set in the civil war period where a machine goes on a malfunction underground rampage and brings down Seattle's Banking District, causing mass destruction. In the process it uncovers a vein of 'Blight Gas' which turns everyone who breathes it into the living-dead; intent on killing and eating human flesh. A great build-up to some magical 'SteamPunk' adventure.
The world Cherie has depicted is one of immense quality and every page read leaves you wanting more. This is a boneshaker of a ride with airships, Zombies and colourful characters that are all well written. The gruesome and gory scenes are depicted realistically and in a terrifying way.
It's fast paced with lots of action, it has great imagination and I really recommend this book to older readers who might be seeking another outing in the fantasy world of Steampunk. I give this book five out of five - a darn skippy read!
Cherie has a second novel in the series entitled 'Dreadnought' which is coming in 2010 with Tor. Also to come is Clementine which is expected to be published by Subterranean Press 2010.

To find more about the author and her books please take a look at her web site. cmpriest.livejournal.com.

Book Synopsis
In the early days of the Civil War, rumors of gold in the frozen Klondike brought hordes of newcomers to the Pacific Northwest. Anxious to compete, Russian prospectors commissioned inventor Leviticus Blue to create a great machine that could mine through Alaska’s ice. Thus was Dr. Blue’s Incredible Bone-Shaking Drill Engine born.

But on its first test run the Boneshaker went terribly awry, destroying several blocks of downtown Seattle and unearthing a subterranean vein of blight gas that turned anyone who breathed it into the living dead.

Now it is sixteen years later, and a wall has been built to enclose the devastated and toxic city. Just beyond it lives Blue’s widow, Briar Wilkes. Life is hard with a ruined reputation and a teenaged boy to support, but she and Ezekiel are managing. Until Ezekiel undertakes a secret crusade to rewrite history.

His quest will take him under the wall and into a city teeming with ravenous undead, air pirates, criminal overlords, and heavily armed refugees. And only Briar can bring him out alive.
By Mr Ripley's Enchanted Books on October 21, 2009

Now THAT is a cover.

It looks good in the extra large format.

It makes the site worth a visit just for that.

We *LOVE* Steampunk, it is our favorite genre!!

Definitely going to read this book, thank you for the review.