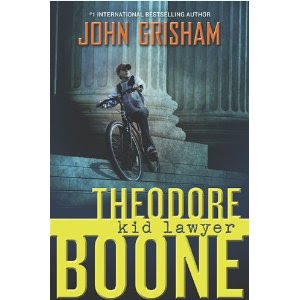 John Grisham - Theodore Boone: Kid Lawyer -Published by Dutton Children's Books - 25 May 2010
Book Synopsis:
In the small city of Strattenburg, there are many lawyers, and though he’s only thirteen years old, Theo Boone thinks he’s one of them. Theo knows every judge, policeman, court clerk—and a lot about the law. He dreams of being a great trial lawyer, of a life in the courtroom.

But Theo finds himself in court much sooner than expected. Because he knows so much—maybe too much—he is suddenly dragged into the middle of a sensational murder trial. A cold-blooded killer is about to go free, and only Theo knows the truth.

The stakes are high, but Theo won’t stop until justice is served. 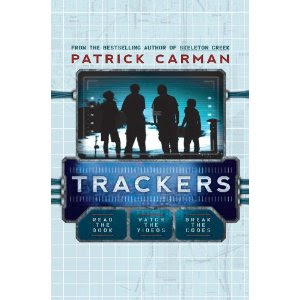 Patrick Carman - Trackers #1 - Published by Scholastic Press - 11  May 2010
Book Synopsis:
In the 21st century landscape of bits and bytes, everyone leaves a digital footprint ... even the most advanced cyber criminals. And that’s where the Trackers come in. Four tech-savvy kids armed with high-tech video cameras and esoteric coding skills, the Trackers can find almost anyone, anywhere. Told through a collage of videos, text, and websites, Trackers #1 follows Adam, Finn, Lewis, and Emily as they become entangled in a high-tech, high-stakes game of cat and mouse with Shantorian, the world’s most dangerous hacker. At least, that’s who they think they’re tracking....
As the four dig deeper into the shadowy world of online crime, they soon learn that things aren’t always as they seem. 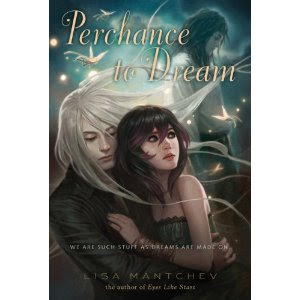 Lisa Mantchev - Perchance to Dream: Theatre Illuminata - Published by Feiwel & Friends - 25 May 2010
Book Synopsis:
When Nate is kidnapped and taken prisoner by the Sea Goddess, only Bertie can free him. She and her fairy sidekicks embark on a journey aboard the Thèâtre’s caravan, using Bertie’s word magic to guide them. Along the way, they collect a sneak-thief, who has in his possession something most valuable, and meet The Mysterious Stranger, Bertie’s father—and the creator of the scrimshaw medallion. Bertie’s dreams are haunted by Nate, whose love for Bertie is keeping him alive, but in the daytime, it’s Ariel who is tantalizingly close, and the one she is falling for. Who does Bertie love the most? And will her magic be powerful enough to save her once she enters the Sea Goddess’s lair? 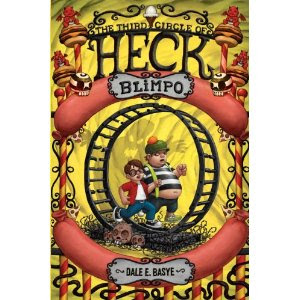 Dale E Basye - Blimpo: The Circle of Heck - Published by Random House Books - 11 May 2010
Book Synopsis:
After his second escape from Bea "Elsa" Bubb, the Principal of Darkness, Milton Fauster makes his way to Blimpo—the circle of the otherworldly reform school, Heck, where he's sure his friend Virgil is sentenced. What Milton finds in Blimpo horrifies him. The overweight dead kids spend most of their time running on giant human hamster wheels called DREADmills that detect and exploit their deepest fears. The rest they spend eating Hambone Hank's barbecue—mystery meat that is delicious, but suspiciously (to Milton, anyway) haunting. Every classroom has a huge TV screen showing happy thin people who taunt Blimpo residents with a perfection they will never attain.

Meanwhile, at her new job in the devil's Infernship program, Milton's sister, Marlo, knows all about trying to achieve perfection. And failing miserably. Can Milton get himself and Virgil out of Blimpo in time to rescue Marlo, too? Or is Fauster the next delicacy on Bea "Elsa" Bubb's menu? 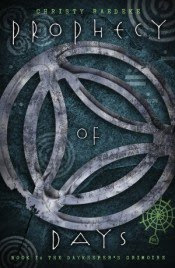 Christy Raedeke - Prophecy of Days: The Daykeeper's Grimoire - Published by Flux - 1 May 2010
Book Synopsis:
When her safe-cracker mom and code-breaker dad inherit a dreary Scottish castle, sixteen-year-old Caity Mac Fireland is not happy. Ripped from her cushy life and friends in San Francisco, Caity’s secret fantasy of being discovered by a Hollywood agent, talent scout, or even just a pageant coach seems more unlikely than ever.
But when Caity stumbles across a hidden room in the castle, its walls covered in strange symbols, her life takes a bizarre turn. She finds herself center stage in an international conspiracy involving warring secret societies, assassins, the suppressed revelations of the Mayan Calendar and the year 2012, plus the fate of humanity.
With the help of her friend Justine back home, and Alex, a gorgeous and mysterious Scottish boy, Caity must race to decipher the code and reveal its message to the world before time runs out.

Oh, what a thrill to see Prophecy of Days listed here! I hope you enjoy it.

Yes yes yes to all of these! Is it wrong that I want all of them? :)