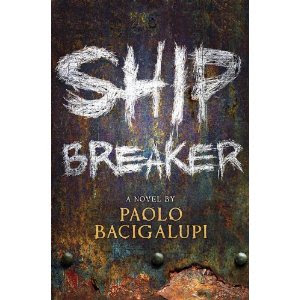 Occasionally I cross into the realms of adult literature - not too long ago I had the rare opportunity to do just this. I managed to read a copy of "The Windup Girl" by Paolo Bacigalupi, which I really enjoyed. So when I found out that he was writing for a younger audience, I was very eager to get my hands on a copy, which I eventually did.

This book draws you into the dystopian future, which is set in a world of climate change and environmental disaster. It shows a grim picture of reality for some, who work and live in poverty. Nailer finds life tough; working for a salvage company and delivering the quota for each day. But fortunately the boy has dreams and a certain amount of luck on his side, as he encounters many a tough and testing time.
The more you read this book, the more you are drawn into the murkier reality, which leaves an unsettling feeling in your stomach. It is very gritty and has you on the edge of your seat - hoping for the good characters to overcome evil and survive the battles ahead.
The book encompasses a lot of feeling and many questions are asked about money - about it being the power and the driving force for everything. The significant relationships between society and friendship versus family life are also asked, which link to the plot very well.
The book is well written but I feel it has a slightly stilted start, perhaps due to a number of vague characters being introduced at the beginning of the book. However once you become acclimatised to the story and the characters, you find yourself immersed within the story world and find it hard to leave.
In America's Gulf Coast region, where grounded oil tankers are being broken down for parts, Nailer, a teenage boy, works the light crew, scavenging for copper wiring just to make quota--and hopefully live to see another day. But when, by luck or chance, he discovers an exquisite clipper ship beached during a recent hurricane, Nailer faces the most important decision of his life: Strip the ship for all it's worth or rescue its lone survivor, a beautiful and wealthy girl who could lead him to a better life. . . .
The adrenalin rush towards the end of the book is immense - a cup of tea is certainly required in order to calm down. The action packed end brings all the emotions to a climax, as the journey comes to an end with a bang. I hope the author ventures into another book for the Younger Adult audience in the future.

I am very interested to hear what others think about this book.

Haven't read that book, but it sounds like what could become a neat movie after reading your quote from it:

But when, by luck or chance, he discovers an exquisite clipper ship beached during a recent hurricane, Nailer faces the most important decision of his life: Strip the ship for all it's worth or rescue its lone survivor, a beautiful and wealthy girl who could lead him to a better life. . . .