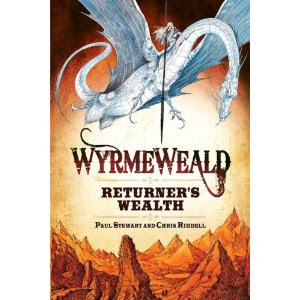 Wyrmeweald is a new series from Paul Stewart and Chris Riddell. This book is entitled 'Returner's Wealth' and is the first within a trilogy. It is written with the older audience in mind, the story deals more intimately with emotions and details a darker side to this fantasy world. The heightened depth of anger and death can be felt throughout this plot -they are not skirted around but instead become an important element to the story.

Young pioneer, Micah, enters Wrymeweald full of hope to return home having made his fortune. But this is a land where wyrmes, fabulous dragon-like beasts, roam wild and reign supreme. In Wyrmeweald man is both hunter and hunted - and seventeen-year-old Micah may never return alive, let alone a hero...After a near-brush with death on the edge of a canyon, Micah soon finds a chance to prove his worth when he meets with Eli, a veteran tracker of Wrymeweald. They choose to defend a rare whitewyrme egg and its precious hatchling before it falls into the hands of a band of evil Kith. But the fledgling wyrme has its own guardian in the shape of the beautiful, brave and dangerous Thrace.
The book starts slightly differently with a very extensive setting, which describes and paints the history of various creatures and their world. The main character introduction and dialogue doesn't appear until later on - within the first few chapters of the book. But as soon as they begin to interact and their personalities unfold, the adventure literally sweeps you off your feet.
The story is beautifully written; the descriptive and expressive language bonds you powerfully with the individual characters and underlying plot. The main theme of 'revenge' is the constant factor which keeps the storyline tight and focused - each character maintains a consistent drive,  which builds up to the ultimate end.
The two main characters, Micah and Aseel, who meet by chance after an attack, develop an emotional attachment. This is portrayed poignantly and is written with an infectious strand - the reader wants them to be together, but knows that this is unlikely to develop. . . . until maybe . . . .
The talent of Chris Riddell, as always, is evident throughout the book. With his intrinsically detailed illustrations, he adds to and enhances the depth of the storyline. Each illustration appears to be strategically placed, down the side of each chapter. As well as occasional larger images, which provide greater impact when required.
This is a very promising start to this new trilogy. This will publicly unfold on the release date 29th April, according to Amazon. This new series should only add to Paul Stewart and Chris Riddell's already substantial fan base.
Posted by Mr Ripley's Enchanted Books on April 11, 2010