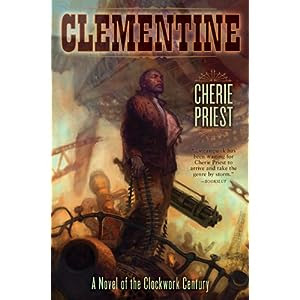 I first came across Cherie's writing after reading 'Boneshaker', which I really loved. Apparently, I'm not the only one who did, as it has been nominated for a Hugo award, which I believe is well deserved . Therefore, I had to get myself a copy of her new book, so I pre-ordered one well in advance from the publisher - Subterranean press in the U.S. I was delighted when I finally managed to get my excited little hands on one.

The first thing about Subterranean press is that they, in my opinion, publish some of the best books which have been written by exceptionally great writers. The finished copies are extremely well put together, and at times, could be described as an object of beauty.
If you are able to, I would recommend tracking down this book. However, it is written for the older reader, and at times, contains some strong content.
The book has a mild Steampunk theme but not as much as in 'Boneshaker'. It is written in the same vain but is much shorter in page content and with less detailed background content. The storyline is compact, keeping the reader focused on the story of the main characters. One of these is Maria, who is a triumph within the book. She's a great feisty female, that no-one wants to mess with, but she's a very enjoyable character to read about. However, I would have liked to have a read a slightly longer book, so that Cherie could have explored the world she really loves to write about in more detail. This would have given the extra edge that fans of this genre so long for. Perhaps they will find this within her other book 'Dreadnought', which will be published later this month, through Tor Books.
The book is definitely another great read. Cherie delivers another fantastical book, bringing adventures full of wild imagination to the forefront. A rush of air blows through your ears, as the airship battles are unleashed on the unsuspecting reader. Another great Steampunk adventure that packs a punch on paper.
Another book you may like is John Scalzi - The God Engines - Published last year.

Book Synopsis:
Maria Isabella Boyd's success as a Confederate spy has made her too famous for further espionage work, and now her employment options are slim. Exiled, widowed, and on the brink of poverty...she reluctantly goes to work for the Pinkerton National Detective Agency in Chicago.

Adding insult to injury, her first big assignment is commissioned by the Union Army. In short, a federally sponsored transport dirigible is being violently pursued across the Rockies and Uncle Sam isn't pleased. The Clementine is carrying a top secret load of military essentials--essentials which must be delivered to Louisville, Kentucky, without delay.

Intelligence suggests that the unrelenting pursuer is a runaway slave who's been wanted by authorities on both sides of the Mason-Dixon for fifteen years. In that time, Captain Croggon Beauregard Hainey has felonied his way back and forth across the continent, leaving a trail of broken banks, stolen war machines, and illegally distributed weaponry from sea to shining sea.

And now it s Maria's job to go get him.

He's dangerous quarry and she's a dangerous woman, but when forces conspire against them both, they take a chance and form an alliance. She joins his crew, and he uses her connections. She follows his orders. He takes her advice.

And somebody, somewhere, is going to rue the day he crossed either one of them.
By Mr Ripley's Enchanted Books on September 04, 2010