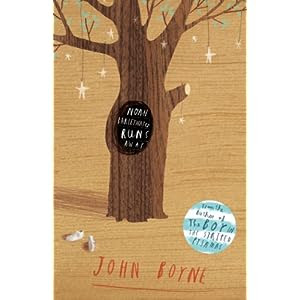 One of the events I attended at the Edinburgh book festival this year was the John Boyne book event 'Noah Barleywater'. All I can say is that it was a privilege to be there, as we were the first people to hear John read, and talk about his new book. Each person came away from the event clutching a shiny proof copy, although there was a bit of a scramble and queue to get it signed, as well as an incredibly early opportunity to read this book.
John Boyne's first venture into the young adult book world, was through the emotional book 'The Boy in the Striped Pyjamas', which brought him great success and acclaim. The subsequent film introduced adults and children alike to his literary prowess. Therefore, his next book was always going to have a hard act to follow. The question is, has he managed to do this?

Noah is running away from his problems, or at least that's what he thinks, the day he takes the untrodden path through the forest. When he comes across a very unusual toyshop and meets the even more unusual toymaker he's not sure what to expect. But the toymaker has a story to tell, a story full of adventure, and wonder and broken promises. And Noah travels with him on a journey that will change his life for ever.
I want to say a great deal about this book. However, I'm not going to be able to do this, as it may spoil your reading pleasure. Therefore, I will do my best to keep this review free from too many secrets.
This book could have only been written by an Irish man, it has all the charm of a leprechaun - I was never quite sure of the forest path that he was leading me down (so to speak!). However, it is beautifully written and cleverly displays the writer's craft throughout.

The book starts with Noah, an eight year old boy, who is running away from home. The question posed to the reader is why he's running into the forest during the early hours of the morning.  The book reads like a modern day fairytale, leading into a much bigger and well-known fairytale by the end. The final outcome doesn't become clear until the very end, even though there are different clues and hints that are shared along the way.
The book is gripping and full of character. The author (for the first time) has been let loose within the imaginary world to tell a really powerful story. In fact so much so, that once you put the book down, it brings you back to the real world with an emotional bang. The book dances along to its own Irish jig - a blend of humour and whit that flow through most pages of the book. But the story also has a magical element to it, which uncovers a more poignant side to life - this doesn't always end happily.

I feel that this book is John's finest work to date, and heartily recommend it to everyone. It will change the way you see even your own life, at least that's what happened with me! The most memorable read this year.........

I actually have an ARC of this. I have so got to push it up my TBR pile now. Thanks for the great review :D

I love this book. Now have both an ARC and a finished copy. Just brilliant.