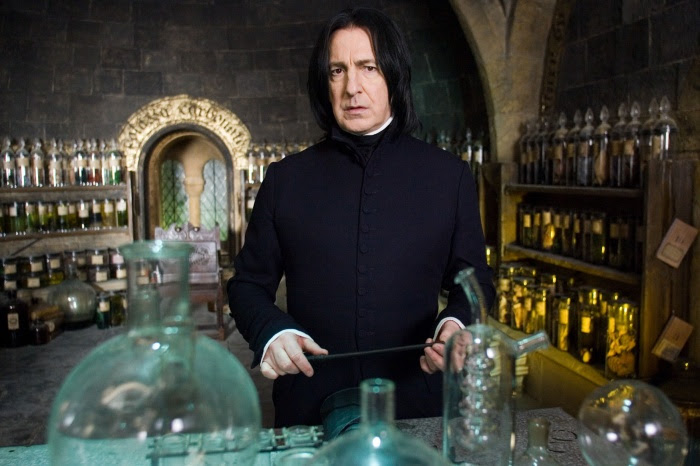 VOTED FAVOURITE CHARACTER FROM HARRY POTTER NOVELS
‘Snape finished calling the names and looked up at the class. His eyes were black like Hagrid’s, but they had none of Hagrid’s warmth. They were cold and empty and made you think of dark tunnels.’ Harry Potter and the Philosopher’s Stone
Severus Snape, Potions master, Head of Slytherin and Death Eater has taken the number one spot in the vote to find the world’s favourite character from the Harry Potter novel.
Snape snatched the top spot from Harry, J.K. Rowling’s personal favourite. When asked about her favourite character  J.K. Rowling said:‘Harry, although I believe I am unusual in this, Ron is generally more popular (I love him too, though) Now that I have finished writing the books, the character I would most like to meet for dinner is Dumbledore.  We would have a lot to discuss, and I would love his advice; I think that everyone would like a Dumbledore in their lives.’
The vote was launched in May 2011 and received over 70,000 votes. Severus Snape gained 20% of those votes (just under 13,000) making him a clear winner. Severus Snape has appeared in all seven of the Harry Potter novels and came to be an integral part of Harry Potter’s life.
Hermione Granger took second place and Sirius Black third. Harry himself came in fourth and Lord Voldemort just made the top twenty at number 17. Dobby is the only non-human character to make the top ten and another Slytherin, Draco Malfoy, completes the top characters in tenth place. The top ten is below (see attached press pack for the complete top 40):
Voters could also suggest their own favourite characters outside of the 40 and of these Oliver Wood was the most popular. Fang, Hagrid’s dog, and the Fat Lady in the portrait at the entrance to Gryffindor gained the least votes with only one each!
The Harry Potter novels have now sold over 400 million copies worldwide and have been translated into 69 languages. J.K. Rowling has generated huge popular appeal for her books in an unprecedented fashion. She was the first children’s author to be voted the BA Author of the Year, and also win the British Book Awards Author of the Year.
By Mr Ripley's Enchanted Books on August 30, 2011