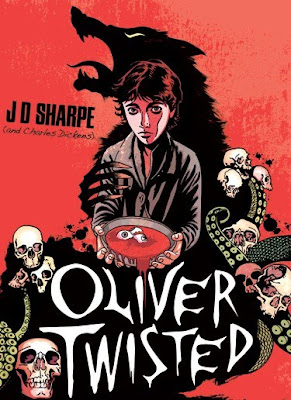 It's a great start to the New Year when you get a book like this to read - a debut book by a new talented author. Although this author does also have another book that has been published under a slightly different name, but I'm not sure why?
Oliver Twisted kicks off a new imprint from Egmont known as Electric Monkey. This is an exciting new imprint and if this book is a measure of the quality to expect then we are all in for a treat.
"Flesh," the woe-begotten moaned at Oliver, baring teeth which were ragged and black. "Flesh" came another moan, and he turned to see two more behind. They began to shuffle towards him, barefoot. The world according to Oliver Twisted is simple. Vampyres feed on the defenceless, orphans are sacrificed to hungry gods and if a woe-begotten catches your scent it will hunt you forever. On the advice of a corpse, Oliver flees his ghastly orphan life to seek his destiny in the dark streets of old London Town, despite the perils of the woe-begotten zombie-infested journey. There he meets the shadowy Dodger, the evil old soul-stealer Fagin, and the menacing Bill Sikes, who is more beast than man. But will Oliver Twisted be the world's salvation, or its downfall?!
This book is an absolute joy to read. When writing about a famous character like Oliver Twist, the author could have easily made the mistake of changing the history, character and flavour of the original book. However, in this case, the author really develops the story creating a fantastic reading experience for all who read it. There have been some slight subtle changes made to the character and some creative changes to the story. However, most of the facts have been kept intact - well, nearly most.
Set in the authentic Dickensian time, the main characters Dodger, Fagin, Bill Sikes and good-old Bullseye are all featured in the story, but not as we know them. The book is an interesting slice of Victorian gore. Zombie woe-begotten corpses lurk around every corner waiting to feed on any scrumptious carcass of human flesh. With Vampires feeding on blood and orphans being sacrificed to the hungry gods - there are many dangers lurking within the pages, but these are only the start . . . . .
I really enjoyed reading this book; it's definitely my kind of read. Set in Victorian London (my all time favourite period) with fast paced action and lots of dark monsters - there's nothing that's really not to be enjoyed! The twisted version of events, whilst still relatively in-keeping with the classic tale, will keep you gripped. Please Sir, can I have some more?