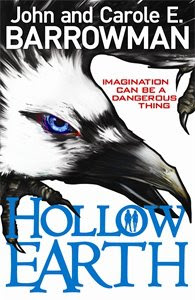 
Lots of twins have a special connection - being able to finish each other's sentences; sensing what the other is thinking; perhaps even knowing when the other is in trouble or in pain - but for 12-year-old twins, Matt and Emily Calder, the connection is beyond special. Together, the twins have extraordinary powers. They are able to bring art to life, or enter paintings at will. Their abilities are sought by villains trying to access the terrors of Hollow Earth - a place where all the demons, devils and creatures ever imagined lie trapped for eternity. The twins flee with their mother to the security of an island, off the west coast of Scotland, where their grandfather has certain protective powers of his own. But too much is at stake, and the twins aren't safe there either. The villains will stop at nothing to find Hollow Earth and harness the powers within...


The Butterfly Effect ': the scientific theory that a single occurrence, no matter how small, can change the course of the universe forever. When a butterfly startles a young rabbit, and the rabbit makes a horse rear, it starts a chain of events, over the course of one day, that will change people's lives . . . and end people's lives. From a climber on Everest to a boy in Malawi . . . from a commercial pilot to an American psycho . . . the chaos knows no bounds. This heart-stopping adventure by writer, film maker and climber Matt Dickinson will leave readers breathless. It's the book Jack Bauer would have read as a teenager!


The most breathtaking and exhilarating ride you will take this year, this is the first in an incredible new action thriller series from Michael Grant, author of "Gone". These are no ordinary soldiers. This is no ordinary war. Welcome to the nano, where the only battle is for sanity. Losing is not an option when a world of madness is at stake. Time is running out for the good guys. But what happens when you don't know who the good guys really are? Noah and Sadie: newly initiated to an underground cell so covert that they don't even know each other's names. Here they will learn what it means to fight on a nano level. Soon they will become the deadliest warriors the world has ever seen. Vincent: feels nothing, cares for no one; fighting his own personal battle with Bug Man, the greatest nano warrior alive. The Armstrong Twins: wealthy, privileged, and fanatical. Are they the saviours of mankind or authors of the darkest conspiracy the world has ever seen? The nano is uncharted territory. A terrifying world of discovery. And everything is to play for...


'I've just had a flesh-eating giant tearing around my house and now I'm in this strange land I don't know anything about!'

CHARLIE KEEPER has been forced from her home by a bloodthirsty and terrifying stranger.But in escaping she discovers her house holds the gateway to the REALM OF BELLANIA - a place of myth, magic . . . and an evil Lord with a very bad attitude.


NOW its fate rests squarely upon Charlie's shoulders. But before she can untangle the mystery that will save Bellania, she needs the answer to a life-changing secret her guardian, the dastardly Mr Crow, has been keeping from her . . . Just who is Charlie Keeper?
Email Post
Labels: 2012 Book Picks february new books