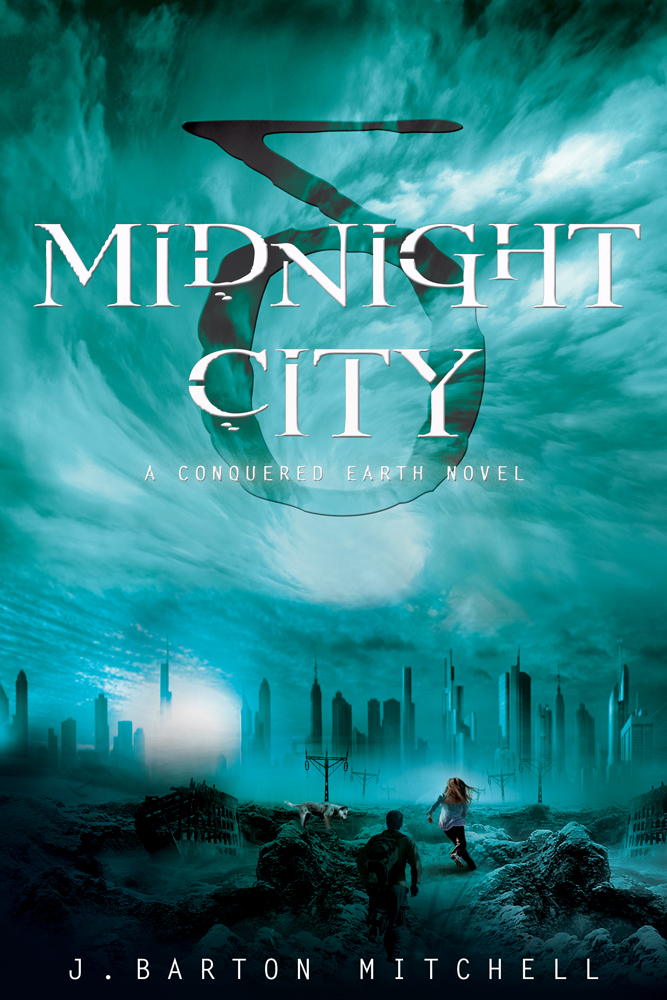 J . Barton Mitchell - Midnight City (Conquered Earth) - Published by St Martin's Griffin - 13 Nov, 2012
Earth has been conquered by an alien race known as the Assembly. The human adult population is gone, having succumbed to the Tone - a powerful, telekinetic super-signal broadcast across the planet, which has reduced them to a state of complete subservience. But the tone has one critical flaw. It only affects the population once they reach twenty-one or twenty-two years old. This means that there is one group left to fight. Teens. Holt Hawkins is a bounty hunter, and his current target is Mira Toombs, a treasure seeker who has escaped from Midnight City after being sentenced to death. It's not long before Holt bags his prey, but their instant connection isn't something for which Holt bargained. Neither is the Assembly ship that crash-lands near them shortly after he captures Mira. Venturing inside the ship, despite the tied-up Mira's objections, Holt finds a young girl who can't remember anything except her name: Zoey. The three soon begin an adventure through alien-conquered North America, encountering young freedom fighters, powerful artefacts of strange science that seem like magic, pirates and brigands, and frightening mutated creatures of the night, all while trying to stay one step ahead of the Assembly. Zoey, in the meantime, starts to exhibit amazing powers while Holt and Mira begin to realize that this young girl just may be the key to stopping the alien invaders.

Mark Steensland - Behind The Book Case - Published by Random House     International - 20 Nov 2012
A girl stumbles into a fantastic world in this tale perfect for fans of Coraline, Alice in Wonderland, and The Twilight Zone.
Spending the summer at her grandmother's house is the last thing Sarah wants to do—especially now that Grandma Winnie has died—but she has no choice. Her parents have to fix the place up before they can sell it, and Sarah and her brother, Billy, have to help. But the tedious work turns into a thrilling mystery when Sarah discovers an unfinished letter her grandmother wrote: Strange things are happening behind the bookcase. . . .

Sarah's mother dismisses the letter as one of Grandma Winnie's crazy stories, but Sarah does some investigating and makes a remarkable discovery: behind the bookcase is a doorway into Scotopia, the land where shadows come from. With a talking cat named Balthazat as her guide, Sarah begins an unforgettable adventure into a world filled with countless dangers. Who can she trust? And can she face her fears, not only in Scotopia, but also back at Grandma Winnie's house, where more secrets and strange goings-on await her?

Philip Caveney - Crow Boy - Published by Fledgling Press - 8 Nov 1012
Young Tom Afflick has never felt so alone. His parents have split up and his mother has relocated him, hundreds of miles away from his home in Manchester to the unfamiliar city of Edinburgh. At his new school, Tom is simply known as 'The Manc' - a blow-in, an outsider. On a routine school trip to the historic site of Mary King's Close, Tom follows the ghostly figure of a young girl - only to find himself transported back in time to 1645, the year of the Edinburgh plague. Apprenticed against his will to a violent plague doctor, Tom needs to use all of his modern-day skills in order to survive, while he desperately searches for a way back to his own time. This children's historical novel is a departure for Philip Caveney - acclaimed author of the Sebastian Darke thrillers for children and the Alec Devlin mysteries - and is sure to be a hit with them.

Antony John - Elemental - Published By Dial Book - 21 Nov 2012
In the near future, most of the population of the United States has been destroyed by the plague. The few remaining survivors live in colonies on the barrier islands off the East Coast. In one colony near Cape Hatteras, almost all the members have elemental powers and can control wind, water, earth, and fire. All but sixteen-year-old Thomas. When the Guardians, the powerful adult leaders, are kidnapped by pirates seeking to take over their colony, it is up to Thomas and a small group of teens to save them and preserve the mysteries of the island.