Robert Westall - The Scarecrows - Published by Bodley Head Children's - March , 1981
There were three people, standing in the darkest place, watching him.
Simon is outraged that his Mum plans to remarry. He can't bear her new fiancé or the way his mother and sister seem to have forgotten his late father. Overwhelmed by hatred and anger he seeks solace in a nearby abandoned water mill. But another, powerful hatred lingers within its walls. And it is about to be unleashed...

Westall's immense talent is evident from the opening line - Simon's anger and unhappiness are tangible, and the Scarecrows' ill-intentions terrifying. 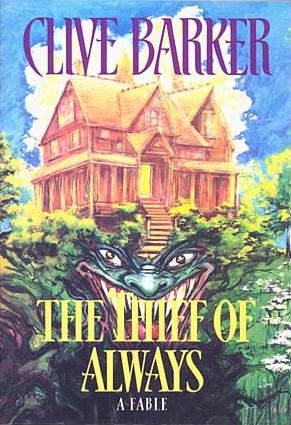 Clive Barker - The Thief Of Always - Published by HarperCollins 5,Nov 1992
Mr Hood’s Holiday House has stood for a thousand years, welcoming countless children into its embrace. It is a place of miracles, a blissful round of treats and seasons, where every childish whim may be satisfied.
There is a price to be paid, of course, but young Harvey Swick, bored with his life and beguiled by Mr Hood’s wonders, does not stop to discover the consequences. It is only when the House shows its darker face – when Harvey discovers the pitiful creatures that dwell in its shadow – that he comes to doubt Mr Hood’s philanthropy.
The house and its mysterious architect are not about to release their captive without a battle, however. Mr Hood has ambitions for his new guest, for Harvey’s soul burns brighter than any soul he has encountered for a thousand years…
“A dashingly produced fantasy with powerful drawings by the author” 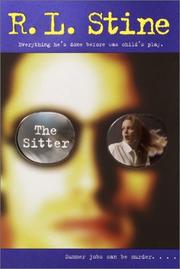 Ellie Saks is dying to escape the city. She’s sick of dead-end jobs, her mother’s disapproval, her loser ex-boyfriend, Clay, who won’t take a hint, and the memories of a terrible incident that occurred years ago. When her best friend suggests a summer in the Hamptons, full of glitzy parties, cool cocktails, and hot dates, Ellie’s on the first Jitney out. To fund all this glamour, Ellie takes a job as a nanny.
From the outside, the family’s beachfront home is perfect. But then Ellie meets four-year-old Brandon, who hasn’t spoken for months. The boy’s icy stare and demonic laughter make clear to Ellie that he is troubled, haunted by something too horrible for words. She begins to receive threatening messages and disturbing gifts. But it’s not until she barely escapes a harrowing experience that she realizes her life may depend on figuring out who’s behind it: Clay? Brandon? And why? And every once in a while, in a crowd, she sees a face she hasn’t seen in seven years—the face of a boy who died long ago. It would seem that Ellie’s summer of fun has turned into a summer of horror—one she’ll never forget . . . if she survives it at all.

Darren Shan - Lord Loss (Book one of the Demonata) - Published by HarperCollins - 6 June , 2005
“The door feels red hot, as though a fire is burning behind it. I press an ear to the wood – but there's no crackle. No smoke. Just deep, heavy breathing… and a curious dripping sound. My hand's on the door knob. Inside the room, somebody giggles – low, throaty, sadistic. There's a ripping sound, followed by snaps and crunches.
My hand turns. The door opens. Hell is revealed.”
When Grubbs Grady first encounters Lord Loss and his evil minions, he learns three things:

Charlie Higson - The Enemy - Published by Puffin 3 Sep , 2009
They'll chase you. They'll rip you open. They'll feed on you...When the sickness came, every parent, policeman, politician - every adult - fell ill. The lucky ones died. The others are crazed, confused and hungry. Only children under fourteen remain, and they're fighting to survive. Now there are rumours of a safe place to hide. And so a gang of children begin their quest across London, where all through the city - down alleyways, in deserted houses, underground - the grown-ups lie in wait. But can they make it there - alive?

Marcus Sedgwick - White Crow - Published by Orion Children's 7 April, 2011
It's summer. Rebecca is an unwilling visitor to Winterfold - taken from the buzz of London and her friends and what she thinks is the start of a promising romance. Ferelith already lives in Winterfold - it's a place that doesn't like to let you go, and she knows it inside out - the beach, the crumbling cliff paths, the village streets, the woods, the deserted churches and ruined graveyards, year by year being swallowed by the sea. Against her better judgement, Rebecca and Ferelith become friends, and during that long, hot, claustrophobic summer they discover more about each other and about Winterfold than either of them really want to, uncovering frightening secrets that would be best left long forgotten. Interwoven with Rebecca and Ferelith's stories is that of the seventeenth century Rector and Dr Barrieux, master of Winterfold Hall, whose bizarre and bloody experiments into the after-life might make angels weep, and the devil crow.

Chris Priestley - Mister Creecher - Published by Bloomsbury - 2 Oct, 2011
Billy is a street urchin, pickpocket and petty thief. Mister Creecher is a monstrous giant of a man who terrifies all he meets. Their relationship begins as pure convenience. But a bond swiftly develops between these two misfits as their bloody journey takes them ever northwards on the trail of their target . . . Victor Frankenstein.


Darren Shan - Zom-B - Published By Simon & Schuster - 27 Sep 2012
Zom-B is a radical new series about a zombie apocalypse, told in the first person by one of its victims. The series combines classic Shan action with a fiendishly twisting plot and hard-hitting and thought-provoking moral questions dealing with racism, abuse of power and more. This is challenging material, which will captivate existing Shan fans and bring in many new ones. As Darren says, "It's a big, sprawling, vicious tale...a grisly piece of escapism, and a barbed look at the world in which we live. Each book in the series is short, fast-paced and bloody. A high body-count is guaranteed!"
Posted by Mr Ripley's Enchanted Books on October 23, 2012